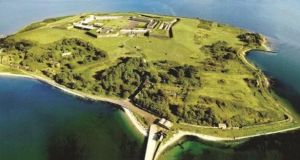 Visitors to the island are taken on a guided tour through its 1,300-year history.

It may well once have been about as attractive a destination as Van Diemen’s Land or the Bastille but the former prison of Spike Island has undergone a complete metamorphosis and now has won its second international major tourist award in the space of just over two years.

Back in October 2017, Spike Island was named as Europe’s leading tourist attraction at the prestigious World Travel Awards 2017, beating off some stiff competition from Buckingham Palace, The Eiffel Tower, the Colosseum and the Acropolis in the European category.

Now, Spike Island, which has been developed by Cork County Council with support from Fáilte Ireland, has scooped another prestigious award, being named Best Attraction at the International Travel and Tourism Awards 2019 in London yesterday evening.

Recognition of the achievements of Cork County Council in the development of the former prison site into a world class visitor attraction has today been welcomed by Council officials with the people of Cork also praised for their help in making Spike Island a phenomenal international success.

Chief Executive of Cork County Council, Tim Lucey, welcomed the news, pointing out that visitor numbers have grown steadily from 27,000 in 2016 to over 81,000 in 2019 and the island attraction is well on course to break the 100,000 mark next year.

The addition of a second ferry service from Cobh to Spike Island will facilitate further increases in visitor numbers while the addition of more walking trails on the 100 acre island will also help grow the numbers wanting to experience the island with its rich history, said Mr Lucey

“The ITTAs Best Attraction Award will further the brand internationally and adds to the growing accolades for Spike Island including the 2017 World Travel Awards as ‘Europe’s Leading Tourist Attraction’,” he added.

Mayor of the County of Cork, Cllr Christopher O Sullivan also welcomed the award and paid tribute to Cork County Council management and staff for their development of the island to the point where it could now competing successfully international in such competitions.

“Spike Island is a truly unique experience, enjoyed by locals and international visitors alike. It combines a ferry ride, scenic walking trails through over 100 acres and many fascinating historical exhibitions detailing the rich authentic history on Spike Island.

“Every visitor can find something to connect with here but crucially it is the staff and tour guides who are passionate about delivering and sharing that story that makes it work so well. This impressive achievement reflects the commitment of our council staff to quality storytelling,” he said.

Visitors to the island are taken on a guided tour through the 1,300-year history of the island from the time it was home to a 6th century monastery right up to more modern times with the emphasis on the 19th century star shaped fortress built by the British to protect Cork from foreign invasion.

That same fortress became the largest prison in Britain or Ireland in the 1850s, according to local historians, when its numbers swelled during the Famine to over two thousand before it closed as a prison in 1883 and became a British military base.

But the British began using it as a military prison during the War of Independence when some 1,400 members of the IRA were incarcerated there until their release with the Truce and the British finally withdrew from Spike in 1938 when it was handed over to the Irish Free State.

The Irish army and navy used the island and fortress over the next forty seven years before the island became a prison once again when it was used to house young offenders including many joyriders before it finally closed as a prison in 2004.