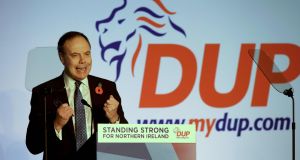 Threats made against the Ulster Unionist Party (UUP) played no role in the party’s decision to stand aside in North Belfast in the forthcoming UK general election, the party’s leader-elect has said.

“We as the Ulster Unionist Party do not respond to threats and intimidation,” Steve Aiken said.

“If anybody knows anything about me, if I was being threatened it’s probably more likely I would have gone the other way, let’s be abundantly clear about that.

“We don’t respond to those. We do what is right.”

A police investigation was launched last week after threats were made to party members and staff – including some alleged to have come from loyalist paramilitaries – over the party’s refusal to form an electoral pact with the DUP in North Belfast.

DUP deputy leader Nigel Dodds is defending a narrow majority of about 2,000 votes against the Sinn Féin candidate and Lord Mayor of Belfast John Finucane.

Mr Aiken had previously said the UUP would field candidates in all 18 of Northern Ireland’s constituencies, but the party announced on Sunday that it would not stand in North Belfast following “discussions with senior political and community figures”.

As “a party that believes first and foremost in the union”, Mr Aiken said, the UUP would not stand in order to give Mr Dodds the best chance of holding the seat.

“In the face of Boris Johnson’s terrible deal which forces Northern Ireland towards the edge of the union,” he said, “we cannot gift a seat to Sinn Féin who support this direction either in North Belfast or Fermanagh and South Tyrone.”

He refused to be drawn on whether the party would stand candidates in the remaining 17 constituencies.

“We’re still in the selection process,” he said. “We are a party of rules and we are going through the nomination stages.”

The SDLP has also announced that it will stand aside in North Belfast in one of a number of similar pledges by pro-Remain parties in Northern Ireland this week, including Sinn Féin and the Green Party, to maximise the chances of such candidates defeating the DUP, which has backed Brexit.

Mr Aiken, who is an MLA for South Antrim, was the only candidate to put himself forward for the leadership of the UUP after its outgoing leader, Robin Swann, stood down. He is due to be elected at the party conference on Saturday.