Unions, community groups and housing bodies to gather for event at City Hall at 5pm 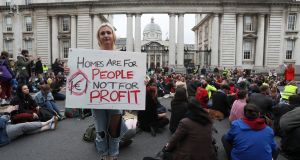 A file photograph of participants at a previous Raise the Roof protest in Dublin. Trade unions, political parties, student and community groups are to join forces in Cork at 5pm on Monday for a rally calling for action on the housing crisis. Photograph: Brian Lawless/PA Wire.

Trade unions and community groups are urging the public to support of a rally outside Cork City Hall this evening demanding radical action on the State’s housing crisis.

The rally will coincide with a motion being initiated at Cork City Council by Lord Mayor Cllr Mick Finn, which demands urgent action to address housing problems nationally and locally. It calls for significant investment in public housing construction through local authorities, action on evictions and rent certainty for tenants and a legal right to housing.

Barry Murphy, spokesman for Cork Raise the Roof, said there were record levels of homelessness, record numbers on housing waiting lists and huge levels of insecurity in the rental sector.

“The protest rally is a chance for the people of Cork to show their dissatisfaction with failed Government policy on housing and to demand action on the single greatest problem facing our society today.”

A Raise the Roof rally in Dublin last October in support of an Opposition Dáil motion on housing saw an estimated 15,000 people gather to call for greater State involvement in the provision of housing.