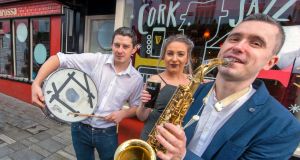 Bridge may have an image as that most sedate and genteel of card games while jazz originated in the dangerously seductive world of New Orleans brothels, but it’s thanks to bridge that Cork can boast one of the country’s best known musical events – the Guinness Jazz Festival.

The festival’s programme director, Jack McGowran explained that it owes its origins to a cancelled bridge convention in the city’s Metropole Hotel in 1978, when marketing manager Jim Mountjoy found himself with a vacancy to fill.

“Jim had a cancellation of a bridge tournament, and he went looking to replace it. And at the back of his head he came across the idea of a jazz festival and he floated the idea to the local jazz society who used to play records in the Met,” said Jack.

“They all came together and they got a sponsor, John Player, and they got Ronnie Scott to come over from England and that’s how it all started. It’s been run by the jazz committee so it’s been a very good mix of local enthusiasm and expertise and some other expertise brought in over the years.”

Jack recalled attending the second festival a year later as a punter when American saxophonist Gerry Mulligan brought his All Star Band to Cork. Surveying the intervening years, he picked out Dizzy Gillespie in the Opera House as among the most memorable concerts.

“This year for example we have Grammy award winning jazz pianist, Robert Glasper and drummer Jason Marsalis from New Orleans as well as Jacob Collier from the UK while I’m really looking forward to Larry Correll and The Eleventh House at the Everyman Theatre on Sunday,” he said.

“We will have around 1,000 musicians from 20 countries performing and for the true jazz fans, it’s still rated as one of the biggest jazz festivals in Europe and is well appreciated. This weekend, we will have a lot of agents and organisers coming from Europe to see how Cork is so successful.

“It’s a good sign that we are delivering what they want and you must remember jazz is quite a small market so to deliver over 40,000 people over the course of the bank holiday weekend is a big achievement – and it’s worth around €20 million to the Cork economy which is significant too.”

For full festival details and to buy tickets for the 2016 Guinness Cork Jazz Festival log on to www.guinnessjazzfestival.com.