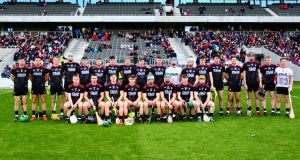 The families of Cork’s martyred Lord Mayors, Tomas MacCurtain and Terence MacSwiney have welcomed the decision by Cork GAA to honour the two men with special commemorative jerseys worn by Cork team to mark the 100th anniversaries of their deaths.

MacCurtain’s granddaughter, Fionnuala MacCurtain and Mac Swiney’s grandson, Cathal Mac Swiney Brugha both spoke of their pride at the fact that the Cork hurlers will take to the field today for their league game against Limerick wearing the specially designed commemorative jerseys.

Ms MacCurtain told The Irish Times that the MacCurtain family were very proud that the Cork hurlers would wear the jersey bearing her grandfather’s image as it was important that people celebrated his life and not just the circumstances of his death at the hands of the RIC.

“We’re delighted that they are acknowledging the centenary and from my point of view, it’s nice that people are looking at my grandfather’s achievements including his love of Irish culture including Gaelic games rather than just the circumstances of his death,” she said.

“He had such a love for the Irish language and music and for Irish sport and he was a proud champion of Irish culture and heritage and it’s nice that he is remembered for that and not just remembered for being murdered by the RIC 100 years ago next month,” she added.

MacCurtain was shot dead by a party of RIC at his home in Blackpool on March 20th 1920 two months after he was elected Lord Mayor of Cork and a jury at an inquest later returned a verdict of murder against British prime minister, Lloyd George and the certain members of the RIC.

MacCurtain was succeeded as Lord Mayor of Cork by his close friend, Terence MacSwiney who died in Brixton Prison on October 25th 1920 after 73 days on hunger strike and he too is remembered on the Cork jersey which was welcomed by his grandson, Cathal MacSwiney Brugha.

“I think it’s a great idea Cork GAA are honouring my grandfather in this way - both himself and Tomas MacCurtain were very much inspired by Irish culture - that really was at their core and though my grandfather wasn’t good at sport and he was proud of anything to do with Irish culture.”

Both the MacCurtain and MacSwiney families will be represented at today’s match between Cork and Limerick at Pairc Uí Chaoimh and Fionnuala MacCurtain and another descendant of Terence MacSwiney, Terry MacSwiney will be presented with the commemorative jerseys at half time.

Cork County Board Chairperson, Tracey Kennedy said that organisation was proud to commission its jersey suppliers, O’Neills to produce the commemorative jersey which also marks a number of other significant events in Cork 100 years ago this year.

“It’s a commemorative jersey that marks a number of events that took place in 1920 – obviously the deaths of MacCurtain and MacSwiney but the Kilmichael Ambush and the Burning of Cork which were hugely important events in the War of Independence are also featured on the jersey.

“Our CEO, Kevin O’Donovan came up with the concept this time and O’Neills did the jersey for us – they are only going to be worn once by each time – the hurlers will wear them today against Limerick and the footballers will wear them on Sunday week against Derry in the league.”