Donegal bridges gaps after ‘all hands on deck’ flood response 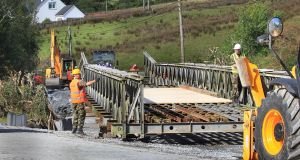 The Irish Army building a replacement road bridge on the main Carndonagh to Quigley’s Point road in Donegal after the original bridge was destroyed in last week’s floods. Photograph: Margaret McLaughlin

Hughie Devlin watched on as engineers from the Defence Forces worked to install a Bailey bridge across the river Cabry in Co Donegal this week.

It is hoped the completion of the job over the weekend will allow the road between Carndonagh and Quigley’s Point to reopen following recent flooding on the Inishowen peninsula.

As he monitored their efforts, Devlin, a retired council worker, recalled flooding in the area in 1981 – when he saw water from the small river rise an unprecedented 25 yards up a steep bank beside it.

When the flooding happened last August 22nd and 23rd, the water was 33 yards up the slope. “Never seen anything like it, then or now,” he says.

The bridge that collapsed as a result of the recent flood surge is known locally as the JFK bridge. It was built in 1965, not long after the US president’s assassination.

The JFK was essentially a straightening of the road, bypassing and making redundant the small two-arched stone bridge, known as the crooked bridge because of the bend in it.

The crooked bridge is getting a new lease of life now. Truck-loads of gravel which were poured on to it this week by the council and soldiers from 2nd Field Engineers in the Curragh, under Capt Barry Campbell, have built it up, so that the level of the old bridge is closer to the level of the R240 road.

Soon, the Bailey, a pre-fabricated structure transported from Kildare, will be slung over the crooked bridge thus reconnecting the severed road and allowing work to start on rebuilding the JFK.

“This is the first big one in a while,” says Campbell regarding the Bailey. “It’s tricky enough because we’re bridging another bridge.”

The work on the bridge is but one major project to reconnect all four major roads on Inishowen, each of which was made impassable for a time by the recent flooding. And now, all around the affected parts of the peninsula, the clean-up is largely over. The reconstruction work is well advanced, and there is some initial assessment as to how the authorities, and the community, coped with the disaster.

“By and large, our systems worked and our structures worked,” says John McLaughlin, Donegal’s director of services for roads and acting county manager. “But that’s not to say that we’re perfect by any means. You can always do some things differently but we did most of the things right, I would say.”

McLaughlin co-ordinated the council’s response when events unfolded rapidly on the night of Tuesday, August 22nd. He is from Moville near the northeastern tip of the peninsula, and was in nearby Redcastle when the first inkling of problems emerged, initially in Raphoe.

It quickly became apparent that Raphoe was not the problem but Quigley’s Point, Burnfoot, Buncrana, Illies near the Fullerton reservoir and dam, and then farther north towards Carndonagh.

McLaughlin headed south on the R238. “I saw water coming out on the roads on places where it never was in the past and running over the top of bridges,” he recalls during an interview in the council’s office in Buncrana, home to the now defunct town council.

“When you have severe flooding at night time in the dark, the biggest thing we do is divert people and put up signs,” he says. “We don’t start digging and diverting rivers or pumping with the fire brigade. That doesn’t solve it when there’s major flooding.”

As news of the flooding spread on Tuesday night (by word of mouth, radio and online), more than 100 council staff, engineers, workmen, and emergency responders headed for the areas in trouble.

One workman driving on the R238 saw what he thought were trees growing out of the middle of the road at a place named, ironically, Three Trees. It was a collapsed bridge, creating a huge sink hole across half the road, which was partially filled with trees that were washed into the void.

Council workers, operating with the assistance of car headlights, sought to cordon off the danger and direct traffic around the hole. Word then began to emerge that Burnfoot, a small village on the other side of the peninsula, was “filling up”.

At this stage, the Coast Guard was brought in as boats and a rescue helicopter service were needed in the village. The fire service joined the effort to help pump the floodwater away.

The county’s major emergency plan was not implemented because the assessment late on Tuesday and early Wednesday was that matters were in hand. Making that assessment with McLaughlin was Gary Martin, the county’s director of emergency services.

Expecting a surge of calls, extra phone lines, and the staff to man them, were put on at the council’s call centre in Milford and also at Buncrana and Carndonagh. However, in the event, there was no torrent of pleas for help because, along with the council, the community stepped in.

“People who just do things and ask no questions,” as McLaughlin describes them. “We have a major emergency plan and the sections, the way it works, were followed however, it wasn’t activated.

“It gets activated when we get into a situation where we can’t cope. We call in resources from outside when we can’t handle it ourselves. That night, it wasn’t that evident.”

The Buncrana offices became the main co-ordinating centre of the council’s response which, once it was clear people were safe, was twofold – fixing roads and getting emergency accommodation.

In the Buncrana offices, senior officials Séamus Hopkins and Brendan O’Donnell, co-ordinated engineers and road workers. Their initial focus was the R238, the ring road around the peninsula which was severely damaged at Three Trees, but also north of Buncrana at Cockhill Bridge and farther on towards Clonmany.

Fewer than 20 families in council houses, including seven on a flood plain in Burnfoot, were made homeless. Some families decamped to friends or the homes of relatives, others were given hotel or B&B accommodation.

Gary Martin briefed Seán Hogan, national director for fire and emergency management, attached to the Office of Public Works (OPW). There were conference calls also to the HSE and the National Ambulance Service to alert them as to which roads were passable, and which were not.

By late Wednesday afternoon, politicians, local and national, were inquiring to see what had happened. Donegal TD Joe McHugh, Minister of State for the OPW and Flood Relief Kevin “Boxer” Moran and Minister for Transport Shane Ross were quick off the mark – with the latter two visiting the peninsula that evening.

“We met them, took them around, gave them a tour and then we had meetings that night . . . probably around midnight,” says McLaughlin, who described the Ministers as “very helpful”.

On Thursday, McLaughlin briefed elected councillors and, with Martin, decided to seek Defence Forces help with the clean up. Finner Camp in south Donegal was called, following established protocols.

Having the troops help to clear debris from in and around houses, McLaughlin says, “gave us another strand where we didn’t want to put our people, who are trained on road works and all, from the public roads getting traffic and detours set up properly. To take them off, would reduce that capacity.”

Since then, dehumidifiers and heaters have helped dry out damaged homes but some have been contaminated with a mix of sewage and diesel. While lawns have been sprayed to decontaminate them and soil samples taken, the lasting effect of contamination, if any, may not be known for some time.

McLaughlin is reluctant to put a cost on the clean-up and repairs just yet. It will be in the tens of millions, however, and is likely to be announced next week.

Apart from the major bridge and road collapses, between 300 and 400 other locations on peninsula have road damages, much of it side rutting where water has washed away support with the result the road will collapse in time. Many under-road drains are also clogged with silt and stones, and will have to be cleared.

Donegal staff are far from self-satisfied at the response of the council to the crisis. But there is a sense that an emergency presented itself and the responses – from all the players – were good.

“I’m very pleased with our own staff, how they moved into action and didn’t have to be asked to work over,” says McLaughlin. “It was a case where all that was required, all hands to the deck, doing the right thing.”