Even if abortion referendum passes, Dáil will be another battleground 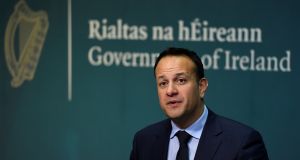 Taoiseach Leo Varadkar: the high number of undeclared TDs (22 – more than the 19 in favour of abortion up to 12 weeks) amongst the Fine Gael ranks will be a concern to the Government. Photograph: Clodagh Kilcoyne/Reuters

A third in favour, a third against and a third that has yet to declare its hand. That is, roughly, how the Dáil looks when it comes to the proposal to legalise abortion on request up to 12 weeks.

The survey of TDs’ attitudes cannot be taken as the definitive word on their voting intentions. The legislation has yet to be published. It may never come before the Dáil, if the referendum is defeated. If it passes, the political context within which these decisions are made will be changed. And people will change their minds; many of them will change them more than once.

And yet Friday’s survey is instructive in this respect at least: it shows that even if the referendum is passed, the Government will have a fight on its hands to pass the legislation it wants.

Two weeks ago, The Irish Times carried out a similar survey amongst TDs on their attitudes to the repeal of the Eighth Amendment. While many TDs declined to state a position, or were still considering the issue, it was clear from the results that repeal would carry a comfortable majority of the Dáil. (The latest tally is 86 TDs in favour of repeal, 42 against with 30 undeclared.)

Certainly the referendum Bill, which must pass the Oireachtas before any proposed constitutional change is put before the people, will sail through the Dáil and Seanad, with even TDs and Senators who are opposed to repeal in favour of putting the issue to a popular vote.

But the expected legislation which the Government has said will follow a vote to change the constitution will be a different ballgame, Friday’s survey suggests.

The Government will publish a general scheme – or “heads” – of this Bill well in advance of the referendum. The heads are not the legislation itself, but rather a summary of what it will seek to do. The Government has agreed that this should be drafted over the coming weeks (in reality it has been in preparation for months) and that it will be based on the report of the Oireachtas committee on the Eighth Amendment. The committee made several recommendations for Ireland’s abortion law in the future, but the most striking – and, to some, controversial – was the proposal to legalise abortion on request up to 12 weeks in pregnancy.

It was on this point that The Irish Times has now asked TDs’ views.

Just as it is in the electorate at large when it comes to the outcome of the referendum, so it is in the Dáil on the proposed legislation: it’s the middle ground that matters.

Though the numbers reported on Friday look extremely tight, Government nerves will be eased by the knowledge that it is likely to be able rely on another 21 Sinn Féin votes should the referendum pass and the legislation be tabled in the Dáil.

Though the party is currently against abortion on request up to 12 weeks, it is likely that the leadership will ask the membership to change this position in an ardfheis later this year. Almost all the party’s TDs, including the incoming leader Mary Lou McDonald, say they are in favour of a more liberal position.

However, the high number of undeclared TDs (22 – more than the 19 in favour) amongst the Fine Gael ranks will be a concern to the Government.

Government sources say that the intervention of Tánaiste Simon Coveney this week, who said he would seek to change the 12 weeks proposal if the referendum is passed, will strengthen the hand of those in Fine Gael who are in favour of repeal but feel the 12 weeks proposal is what Taoiseach Leo Varadkar said would be, for many people, “a step too far”.