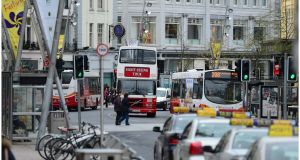 Cork city is set to pedestrianise many of its streets as it reopens during the coronavirus crisis. File photograph: Bryan O’Brien /The Irish Times.

Cork city is set to pedestrianise many of its streets and provide additional cycling facilities as part of a city council’s strategy aimed at facilitating social distancing to allow the city reopen during the coronavirus crisis.

The council is also looking at expediting snagging work on Harley Street between Patrick’s Quay and MacCurtain Street to facilitate pedestrians using the street once again following the construction of the Mary Elmes Bridge.

The option of encouraging pedestrians to move on the right side is also being considered for several pedestrianised bridges including Mary Elmes Bridge, Shandon Bridge, St Vincent’s Bridge, Trinity Bridge and Nano Nagle Bridge.

“There will be no impediment on pedestrian movement (on these bridges) but like the London Underground, pedestrians will be encouraged to walk on the right,” said a Cork City Council spokeswoman.

Meanwhile new bike stands are to be located at 43 new locations around the city including several in the city centre as well as in Blackpool and Douglas to encourage people to consider cycling.

The city council is also examining the possibility of introducing new bike stands in surrounding towns and villages such as Ballincollig, Tower, Glanmire and Blarney which were incorporated into an expanded city in May 2019.

Key cycling routes into the city are under review to identify any improvements to cycling infrastructure that could be implemented while opportunities to convert sites to ‘Park & Walk’ facilities are being investigated.

Cork City Council Assistant Chief Executive Brian Geaney said the plan has been prepared in conjunction with the government’s re-opening road map for the country as a whole over the next few weeks.

“First and foremost, we want residents, workers and visitors to the city to feel that they can safely practice social distancing in our city and that it is an attractive place to visit during these unusual times.

“We started with the city centre but are looking out to the wider new city. Our approach protects health and wellbeing but all proposed interventions will need to be fully considered by all stakeholder interest groups in the city.”

Mr Geaney said the Covid 19 pandemic had provided Cork City Council with an opportunity to review its management of the city and rethink the future of the city in a way that boosts quality of life, sustainability and opportunity.

“While we are informed by other Irish and international cities, Cork is unique in the way that its homes, workplaces, retail and hospitality are configured and so we need a unique response,” he said.

“A street-by-street approach will be adopted in relation to particular on-street proposals. Cork City Council will seek unanimity of purpose as specific mobility measures are proposed for various streets,” he added.