Cork city installs new bridge over north side of river

Mary Elmes Bridge expected to carry 11,000 pedestrians and cyclists over Lee every day 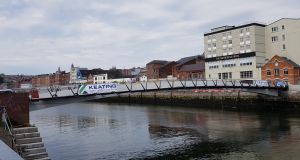 Cork’s latest addition to its collection of bridges has been hailed as an important piece of infrastructure for people in the city by the Lord Mayor of Cork, Cllr Mick Finn, following its successful installation over the north channel of the Lee.

Cllr Finn said the €5 million, 165-tonne Mary Elmes Bridge, linking Merchant’s Quay in the city centre and St Patrick’s Quay on the north side of the river, would prove a major addition in terms of providing greater access to the Victorian Quarter for both locals and visitors.

“This new bridge named after Mary Elmes, often described as the Irish Oskar Schindler for her heroism during World War II, will be one of the key elements in a plan to promote and develop transport in and around the city,” said Cllr Finn.

Cork people woke up this morning to see the 66-metre long prefabricated bridge, spanning the north channel of the Lee following its successful installation on Friday evening after being transported upstream from Cobh on a barge assisted by two tugboats.

The bridge, which was designed by ARUP & Wilkinson Eyre Architects and fabricated off-site by engineering firm, Thompsons of Carlow, was brought first to Doyle’s Shipping Yard in Cobh where it was assembled for transport on the barge upstream to Cork city earlier this week.

Engineers then used two cranes, a 500-tonne crane and a 750-tonne crane to lift the bridge from the bar and put it in place on the specially constructed abutments on both Merchants Quay and St Patrick’s Quay to which it was securely fixed by construction staff.

According to Cork City Council, it’s expected the bridge, the 31st to span either the north or south channels of the Lee in the city, will carry up to 11,000 pedestrians and cyclists daily between the Victorian Quarter and surrounding areas on the north side of the city, and the city centre to the south.

Cork City Council officials have estimated that the bridge will be used by 3.9 million people a year and result in a cutting of journey times of 1.8 minutes per day which will equate to savings of €11.20 per hour in journey times for people and will add more than €800,000 to the local economy per annum.

According to a Cork City Council spokeswoman, the bridge, which is set on concrete and steel butresses, incorporates flood protection measures where, in the event of a particularly high flood, the bridge ends can be closed by pulling across integrated flood barriers to stop waters flooding on to the quays.