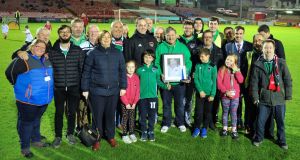 Warm tributes have been paid to Cork City FC stalwart and youth worker John Kennedy (56), who drowned while swimming near Youghal in East Cork at the weekend.

Mr Kennedy, who was a popular volunteer at Cork City FC for more than 30 years, died after he got into difficulty while swimming at Caliso Bay between Youghal and Ardmore in Co Waterford on Friday.

It’s understood that a member of the public on the shore raised the alarm at about 4pm when Mr Kennedy disappeared from sight and the Irish Coast Guard launched a search and rescue mission.

The volunteer crew of Youghal RNLI were tasked by the Irish Coast Guard to assist and they quickly located Mr Kennedy on their arrival at Caliso Bay and brought him aboard their inshore lifeboat.

The RNLI crew began CPR on Mr Kennedy and worked on him as they returned to Youghal where he was attended to by ambulance crew but he was pronounced dead a short time later by a local GP.

A native of Skibbereen, Mr Kennedy lived at Ringmahon Road in Mahon in Cork city and is survived by his wife, Christine, his son, Aaron, his daughter, Grace and his brothers, Maurice and Declan.

Mr Kennedy was honoured last year by Cork City FC for his work with the football club for whom he served on the Board of Management as well as a volunteer for over the past 30 years.

‘Everyone at Cork City Football Club is devastated by the news that John Kennedy has sadly passed away. Our thoughts go out to John’s family, and his many friends,” said Cork City FC in a statement.

As a volunteer at the club for over 30 years, Mr Kennedy was known by League of Ireland supporters all around the country for “his loyalty, enthusiasm and love of Cork City FC,” added the club.

Cork City FC said the late Mr Kennedy was involved in organising buses to carry supporters to and from almost every away game and “was a recognisable face to all Rebel Army supporters”.

“John was the epicentre for our club’s role and work in the community, which made our club a home for many of those less fortunate. He will be missed by all of us, but he will never be forgotten.”

Former Lord Mayor of Cork, Cllr Tony Fitzgerald, recalled the late Mr Kennedy’s work with both Ógra Chorcaí and Foróige and said he would be a huge loss to the community sector in Cork.

“A wave of sadness across the youth and community sector tonight at the news of John’s passing – John was always kind and generous with time and always in touch with young people’s needs”.

And fellow member of Cork City Council Cllr Kieran McCarthy also paid tribute to the late Mr Kennedy for his work with young people in the Mahon and Blackrock areas of Cork city.

“He was a pure gentleman and a stalwart community man – his interest and support of youth projects, sport and local heritage was vast – his presence in Mahon and Blackrock will be sorely missed.”