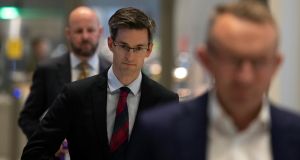 Public health officials have called on people to halve their social contacts over the new week, as almost 700 new Covid-19 cases were reported over the weekend.

Of Sunday’s cases, 241 were in Dublin, 36 in Cork and 19 in Donegal. Community transmission featured in 58 cases.

The new cases were seeded in the past week, acting chief medical officer Dr Ronan Glynn said. “Plan to see half the number of people this week that you saw last week,” he advised.

In Northern Ireland, the number of coronavirus cases also continued to rise over the weekend, with 222 more cases recorded by the North’s department of health on Saturday, and a further 176 cases on Sunday. This brings the total number of confirmed cases there to 9,341, including 977 positive results confirmed in the past seven days.

Meanwhile, Germany and Iceland look set to be removed from Ireland’s “green list” of countries exempted from rules on travellers to restrict their movements on arrival here.

With rates of the virus rising in most countries across Europe, the incidence in both countries has risen above the threshold of 25 cases per 100,000 people applied by the Irish authorities when establishing the list only last week.

Germany’s 14-day incidence increased yesterday to 25.8, while Iceland’s is now 47.9, according to the latest data from the European Centre for Disease Control.

Although the Government takes into account other factors when deciding which countries go on the green lists, should current trends continue, both countries are likely to be taken off the revised list when it is updated on Thursday.

Ireland’s 14-day incidence of the disease stood at 63.2 per 100,000 people on Friday, according to the latest epidemiological reported from the HSE’s Health Protection Surveillance Centre.

However, individual county rates varied from 123.6 per 100,000 of population in Dublin – the worst-affected county – to 10.7 in Sligo, where the spread of the virus is lowest.

Within Dublin, incidence rates vary from 187.3 in Dublin North-West to 55.9 down in Dublin South, according to the report.

Over the past fortnight, 102 people – 47 patients and 55 staff – have acquired the virus in a healthcare setting. During the period 3,010 people tested positive, while 85 with the virus were hospitalised and seven required admission to an intensive care unit.

Meanwhile, there were 79 patients with Covid-19 in hospital as of 8pm on Saturday night, up from 54 a week earlier. Sixteen patients were in ICU, up from 12 in the space of a week.

There are 485 free beds, and 48 free critical care beds, in the system at present.

The European Union is to provide €3.8 million in financial support to the Health Service Executive to cover some of the past costs linked to the Covid-19 pandemic.

The money will pay for some costs of transporting personal protective equipment from outside the EU in April and July this year, Minister for Health Stephen Donnelly has said.

Ireland is one of 18 EU member states, along with the UK, receiving support from Europe for cargo transport operations during the pandemic.