Cork businesses hoping region gets its due in planning framework 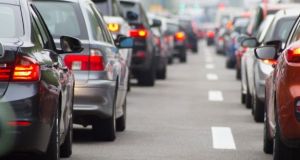 Business leaders in Cork hope a series of new road projects and public transport developments will be part of the Government’s National Planning Framework.

Business leaders in Cork are confident that a number of major infrastructure projects for the region will get the green light when the Government’s National Planning Framework is announced tomorrow.

Cork Chamber chief executive Conor Healy said the organisation’s focus would not just be on infrastructure projects for Leeside but also on how the plan envisages Cork developing economically over the next two decades.

“The Ireland 2040 plan is a hugely important opportunity to restore balance to growth across Ireland to ensure a better, more sustainable society and economy for the future of our country. In Cork, Ireland has a thriving second city and its status needs to be clearly stated in the 2040 plan,” he said.

Mr Healy identified a commitment to the €850 million M20 Cork-Limerick motorway, the €110 million Dunkettle Interchange and the €180 million N28 Cork to Ringaskiddy road as essential to driving growth and ensuring Cork can provide a counterweight to Dublin.

He also expressed hope that the Government would recognise the Cork Docklands as a national asset which would help the areas grow jobs and population. He said that for Cork to become a truly sustainable city, there needs to be significant investment in public transport also.

“If Government is to live up to its vision of avoiding planning mistakes of the past we cannot ignore the importance of public transport,” he said.

Laurence Owens, chief executive of Cork Business Association, said a particular emphasis should be put on the long mooted Northern Ring Road, estimated to cost €400-€500 million, which he believes could help provide a balance to Cork’s growth as a city.

He said that while he hoped the N20, the N28, the Dunkettle Interchange and the €130 million Macroom-Ballyvourney bypass would improve travel times to and from Kerry, they could not be treated nor delivered in isolation.

“They all need to be linked up and the one project that is critical from the CBA’s perspective in that regard is the Northern Ring Road - it’s every bit as critical as any of the others as it is essential to provide proper access through the Northside of the city to allow it develop like the southside.

The Northern Ring Road would provide access to vast tracts of land to the north of the city for commercial and residential development and would make for a more evenly balanced growth as the southside of the city is currently reaching nearing maximum development capacity, he said.