About 150,000 fans set to attend series of concerts in city over bank holiday weekend 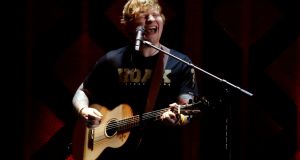 Business leaders in Cork hope that a series of Ed Sheeran concerts at the redeveloped Páirc Uí Chaoimh this weekend will provide a multi-million euro boost to the local economy. Photograph: Mario Anzuoni/Reuters.

Business leaders in Cork hope that a series of Ed Sheeran concerts at the redeveloped Páirc Uí Chaoimh this weekend will provide a multi-million euro boost to the local economy.

About 150,000 people are expected the concerts at the stadium on Friday, Saturday and Sunday, the first since it reopend after an €80 million revamp, as Sheeran kicks of a nine date Irish tour.

Conor Healy, chief executive of Cork Chamber, said the sold-out concerts promise to be a major boon to the Cork economy over the bank holiday weekend and that there was “massive excitement” ahead of them.

“Looking at the most recent comparable event - the Bruce Springsteen concert at Páirc Uí Chaoimh in 2013 was hugely successful with a huge number of traders in the hospitality sector and other sectors saying it was the busiest day in memory for them, which is hugely encouraging,” he said.

“I expect Ed Sheeran playing here three nights is going to be even more significant and it impacts on all trading activity, bars, restaurants, hotels and taxis and every outlet providing hospitality services so it’s going to be a fantastic boost coming after some challenging months due to the bad weather.”

Aaron Mansworth, vice president of the Irish Hotel Federation, said the concerts had led to almost full occupancy in the 2,500 beds in hotels across the city, suburbs and surrounds.

“A lot of hotels were very fair and they haven’t milked the rates and kept them at good competitive pricing and it puts Cork on the map and we hope it’s the first of many such concerts involving international artists given that Páirc Uí Chaoimh is a fantastic venue since its redevelopment,” he said.

The garda’s traffic management plans for the three concerts involve shuttle buses ferrying fans to the stadium as there will be no parking either there or in the Ballintemple area over the weekend, with a tow away operation facing cars that are parked near the stadium.

Insp Finbarr O’Sullivan said Bus Éireann would operate a shuttle bus to the stadium every five minutes from 3pm on Friday. It will run from Lapp’s Quay in the city centre while there will also be a service every 20 minutes from Kent Station on the Lower Glanmire Road.

For those travelling to Cork by train from east Cork and north Cork, Iarnrod Éireann is providing free parking at Midleton, Carrigtwohill, Glounthaune and Little Island stations while there will also be extra late night rail services after the concerts.

Insp O’Sullivan said that taxis will drop off passengers at a designated area on the Victoria Road and also at the junction of Boreenamanna Road and Churchyard Lane.