CervicalCheck scandal: What is it all about?

Taoiseach Leo Varadkar has said that he is "full of sorrow" and "very angry on behalf of the 160 or so women who were not told of the results of the audit" when answering questions on the cervical cancer scandal in the Dáil. Video: Oireachtas TV 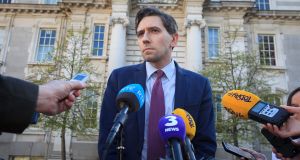 Minister for Health Simon Harris: has said women who are worried can undergo a repeat smear test at no cost. Photograph: Gareth Chaney/Collins

What is the cervical cancer screening scandal about?

Scores of women with cervical cancer were not told that smear test results showing them to be in the clear were in fact inaccurate and the revised test results were kept from them for years.

How did this come to light?

The controversy arose after Vicky Phelan, a 43-year-old mother of two from Annacotty, Co Limerick, who has cervical cancer, settled a High Court case against a US laboratory that was subcontracted by CervicalCheck, the national cervical screening programme, to assess the tests. She received a settlement of €2.5 million last week without an admission of liability. Her case against the Health Service Executive was struck out.

When did Phelan learn about the results of her false test?

Not until last year. She had a smear test in 2011 after the birth of her second child and it initially showed no abnormalities. She was diagnosed with cancer in 2014. That same year an audit of her 2011 test showed that it was not accurate. She is now suffering from terminal cancer and was told in January that she has between six and 12 months to live.

Why was she not told about the results of the audit for three years?

Private correspondence submitted in her High Court case showed Gráinne Flannelly, the clinical director of CervicalCheck, and Kevin Hickey, the Limerick gynaecologist who treated Phelan, had a difference of opinion for more than a year over who should tell women diagnosed with cervical cancer that the reviews of smear tests showed a different outcome.

Flannelly told Hickey in an email, in July 2017, that “a balance needs to be struck in deciding who needs a formal communication of the outcome of the audit”. Hickey subsequently decided to tell the woman after arguing since the summer of 2016 that it was the responsibility of CervicalCheck, not the clinician, to inform the women. Phelan was told at the end of September 2017.

Was this CervicalCheck’s overall approach to informing patients about the false tests?

In 2014, the outcomes of the audits of women’s smears were used for “educational and training purposes” only by CervicalCheck. In 2015, the HSE decided that the audits of the tests should be passed on to the women’s treating doctors and to pass these onto the women “as appropriate.”

The screening programme told doctors in a circular, in July 2016, that the revised test results should be added to the woman’s file. They were told as a “general rule of thumb” that the woman should be told about the results but that clinicians should “use their judgment in selected cases where it is clear that discussion of the outcomes of the review could do more harm than good”. In cases where a woman has died, doctors were told simply to ensure that the result is recorded in the woman’s notes.

How many women have been affected?

Minister for Health Simon Harris sent in a senior team at the HSE to carry out an audit at CervicalCheck over the weekend that found, in the cases of 208 women diagnosed with cervical cancer, an original smear test had falsely given them the all-clear. In total, 162 of these women were not told about the revised results and of these women, 17 are now dead. If signs of the cancer had been detected in the original tests, women may have received treatment earlier.

Have the 162 women, or their families, now been told?

Harris told the Dáil on Tuesday night that “significant progress” has been made in the past two days in contacting the 162 women, or their families, whose audit results showed anomalies. In a further twist in the controversy, he said there were a “potentially considerable number of cases” where women with cervical cancer had not been included in the clinical audit.

Has the controversy led to any resignations?

Yes. Flannelly stood down on Saturday night after Harris failed to express confidence in the management of the screening programme on Friday and added further pressure on Saturday by telling management to reflect on their position.

Were concerns raised about the smear tests in the past?

Yes. Dr David Gibbons, a former member of the screening programme, said he expressed concerns about the outsourcing of smear tests to the US in 2008 but they were dismissed. Gibbons, chair of the cytology/histology group within the programme’s quality assurance committee, brought up his worries with Tony O’Brien, then chief executive of the National Cancer Screening Service and now director general of the HSE, but they were not listened to. Dr Gibbons resigned as a result. O’Brien defended the decision to outsource the testing saying that tests would have otherwise been left idle for a year or been examined by doctors “on their kitchen table”.

What is the Government doing about this whole controversy?

Taoiseach Leo Varadkar has said the Government will hold a statutory inquiry into the failure of the national screening programme to tell the women they were falsely given the all-clear and “why these appalling communication failures happened”. Harris has said the Health Information and Quality Authority, the State’s healthcare watchdog, will be asked to conduct the examination and to assess “who knew what and when.” He said the investigation will be carried out by an international expert clinical panel.

What can women do if they are concerned about past smear tests?

Harris has said that women who are worried can undergo a repeat test at no cost. Close to 8,000 people have contacted a CervicalCheck helpline that was set up to deal with the fallout.

What did Harris know about Phelan’s case?

A briefing note prepared for the Minister nine days before her case was settled told him that the head of the National Cancer Control Programme, Dr Jerome Coffey, had informed the Department of Health that the case was “not a patient safety incident” but rather a reflection of the limitations of the testing. Harris was told that the case was likely to attract publicity.