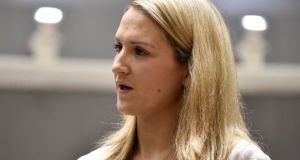 Minister of State for European Affairs Helen McEntee has urged young people to make sure they are registered to vote. File photograph: Getty Images

Over 150,000 young people are not on the electoral register and will be ineligible to vote, a campaign meeting for Youth for Yes, an umbrella group for a number of youth organisations advocating for a Yes vote was told yesterday.

Europe minister Helen McEntee urged young people present to make sure they were registered to vote and remind their friends that if they were not registered, they would be unable to vote in the referendum.

“We need to take our heads out of the sand. Abortion is a reality for Irish women and it has been for decades,” she said. “It can’t continue.”

Niamh Scully, of Belong To, a youth LGBT group, said it was vital that young people make their voices heard in the debate.

“Our generation is so much more tolerant. We accept people for who they are,” she said.

“It is not fair that trans women and non-binary women are being discriminated against in their own country,” she said.

“We have to repeal the eighth. We don’t have another option.”

Áine O’Connell, from the youth organisation Spun Out, began her speech by issuing “trigger warnings” for cancer, fatal foetal abnormalities and crisis pregnancies. She said that during brief treatment for cancer last year, she had been warned not to get pregnant.

Siona Cahill, deputy president of USI, the national students union, said that students made “a considered decision to end out pregnancies”.

Polls suggest that young people are strongly in favour of repealing the eighth amendment. However, young people usually have much lower rates of turnout for elections and referendums.