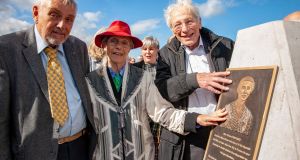 Mary Elmes’s son Patrick Danjou with Charlotte Berger-Greneche and Georges Koltein, who, as children, were rescued from deportation to Auschwitz, at the unveiling of a plazue in memory of Mary Elmes. Photograph: Brian Lougheed

Known as the Irish Oskar Schindler for her role in saving Jewish children from the Holocaust, Ms Elmes was honoured in her native Cork when Cork City Council decided in February to name a new pedestrian bridge after her.

But Mr Danjou said that he was not sure that his mother would have been too impressed with the idea given she was reluctant to accept any honours for her work.

“She was not looking for accolades – she wanted nothing, she refused medals and money and other honours – she said she did what she did because it had to done – that was all,” said Mr Danjou.

Ms Elmes, who was born in Ballintemple in Cork in 1908 and died in France in 2002, worked as a nurse during the Spanish Civil War and later fled to France where she saved 200 Jewish children from being sent to the death camps.

Charlotte Berger-Greneche and Georges Koltein travelled to Cork to witness the woman who saved them being honoured by her native city.

“I was only four years old at the time so I don’t remember anything but I owe my life to Mary Elmes and those who helped her – hopefully naming this bridge after her will mean more people will hear her story,” said Ms Berger-Greneche.

Officially opening the bridge Cllr Sheehan reminded the assembled guests that it was the citizens of Cork who first proposed naming the bridge after Ms Elmes.

Recalling her “unstinting courage and her deep humanity”, Cllr Sheehan said he hoped that naming the bridge after her would prompt people to delve into her remarkable story.

That story included being the only Irish person honoured as “Righteous Among the Nations” by the State of Israel in recognition of her work as an aid worker in the Spanish Civil War and in the second World War, he pointed out.

Up to 25 members of the Elmes family attended event as did film-maker, Paddy Butler who made a TG4 documentary about Ms Elmes and journalist Clodagh Finn who wrote A Time to Risk All on Ms Elmes.

The €5 million pedestrian bridge, which links Merchant’s Quay in the city centre with St Patrick’s Quay, immediately to the north, is the 31st bridge over either the north or south channels of the River Lee.

According to Cork City Council, it is expected the 66m bridge will carry up to 11,000 pedestrians and cyclists daily, will be used by 3.9 million annually and add more than €800,000 to the local economy annually by cutting journey times.