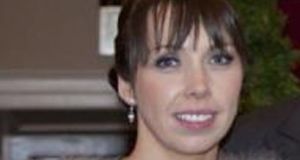 Clodagh Hawe was “a wonderful, dedicated and caring teacher for pupils, a mentor, advisor and a support for all parents and to us, her colleagues, a source of joy, fun and a wonderful friend” the school principal told those attending the opening of Halla Clodagh.

A school in Meath has unveiled a new hall in memory of their former teacher Clodagh Hawe, who was murdered with her three children by her husband and their father.

The 39-year-old teacher was getting ready to teach 3rd class at Scoil Catriona Naomha in Oristown when she and and her three sons, Liam (13), Niall (11) and Ryan (6) were killed by her husband Alan Hawe (40) at their home in Ballyjamesduff, Co Cavan, on August 29th 2016, just days before the new school term started.

On Friday, parents, staff and students got together to remember her after raising €100,000 towards the new Halla Clodagh which was officially opened by the Bishop of Meath Most Rev Tom Deenihan.

The occasion was marked with a Mass and music by the Garda band.

Clodagh Hawe’s mother Mary and her sister Jacqueline were also in attendance.

“We never had a school hall for our 120 students and we always planned on one when Clodagh was still alive,” said Leona Farrelly of the school’s Parents Association.

“She was really behind our plans for the facility and I can only imagine how she’d feel now that we have a hall in her honour.

“When she passed on, the parents association and teachers decided to start fundraising with a passion. It was a distraction from the tragedy and something positive that we could talk to the children about,” she said.

“We had secured €200,000 in funding from the Department of Education and Skills and fundraised the remaining €100,000 that was still needed.

“We already have a buddy bench in her honour at the school which has been spruced up for the event today,” she added.

A plaque was also erected to the murdered teacher with the words Smile, Play and Think of Me.

“It’s very mixed emotions here. Just going into the hall would almost take your breath away. It’s a day of joy with the new hall but also sadness with thoughts of Clodagh and fond memories.

“All her students who had progressed to second-level education since her death all returned here today to remember her. It’s been quite an emotional journey,” Ms Farrelly said.

Principal Ann O’Kelly Lynch said: “Today is a day to celebrate but it’s also tinged with sadness as we remember our beloved Clodagh and her sons.

“During her 13 years as a teacher here, she touched and enhanced so many people in this community.

“She was a wonderful, dedicated and caring teacher for pupils, a mentor, advisor and a support for all parents and to us, her colleagues, a source of joy, fun and a wonderful friend.

“We miss her and will continue to miss her. In dedicating the hall to her memory, her goodness and kindness will be remembered in the school for many years to come.”