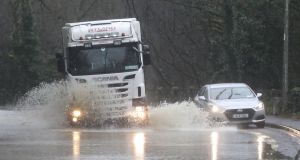 Cork was on Tuesday night bracing itself for further flooding after a day of torrential rain left many roads around the city and county impassable.

Local authorities in both city and county had staff on standby to assist with flood protection measures along the Lee and Blackwater valleys.

Met Éireann had issued an orange rainfall warning for Cork, Kerry, Tipperary and Waterford with forecasts of 80mm of rain over a 48-hour period from Monday into Wednesday. By 8pm on Tuesday, 50mm of rain had been reported at Cork Airport over the preceding 24 hours. The weather warning expired at 9pm on Tuesday night.

Cork City Council Director of Operations, David Joyce, said the council had activated its flood plan and closed a number of roads around the city from early on Tuesday morning in anticipation of flooding and at 5.30pm, it closed the Carrigrohane Straight due to water coming in off the Lee Fields.

“We closed the Lee Road, the Cloghroe Road and the Inniscarra Road early on Tuesday morning and then with continued significant rainfall all day, there was a lot of flooding on the Carrigrohane Straight so we consulted with gardaí and closed the road and it will remain closed overnight.”

“We’re concerned not just about water coming down through the Carrigadrohid and Inniscarra dams but water levels in tributaries that join the Lee downstream ... which all experienced huge rises in water levels.”

#CorkFloods Flooding on the N72 by Mallow Race Course. pic.twitter.com/PPdolg3QAo

We have the full traffic team out this morning as usual. This is the Lee Fields right now @Corks96FM #kcandross pic.twitter.com/0Z0NcBQHlN

Mr Joyce urged motorists not to drive into flooded areas as it is impossible to know what the road surface and what debris there may be in the water while he also warned motorists to be careful of fallen trees which had become dislodged during the ground being saturated.

Cork County Council activated flood protection measures in both Mallow and Fermoy with council staff putting up mountable barriers in both towns as heavy rainfall in the west of the county led to water level rises of over 3m in the Blackwater.

The council had to close Kent Bridge and the quays in Fermoy.

A homeless man in his 50s had a lucky escape when he was rescued from an old pumphouse where he had been staying in Mallow Town Park when floodwaters from the Blackwater began to surround the structure.

Mallow Search and Rescue were alerted around 6pm after a passerby spotted the man waving for help and they managed to bring the man to safety back at their base. He was uninjured and gardaí secured accommodation for him locally overnight.

“That’s a huge amount of rain to fall in 24 hours around Millstreet and it’s taking its time to work its way down the Blackwater but we’ve had to close Longfields Bridge, upstream of Mallow and Bridge Street and the Old Bridge in Mallow as well as Killavullen Bridge downstream of Mallow.”

A spokeswoman for ESB Networks said it dealt with a small number of power outages to homes and businesses, which she said were “business as usual” rather than the result of any major damage from the bad weather, with crews working to restore power.

Met Éireann forecast Wednesday would start off wet but become drier from the afternoon onwards, with a mix of bright spells and some scattered showers across the country, and temperatures of between nine and 11 degrees.