Level 5 to be extended and easing of outdoor restrictions unlikely 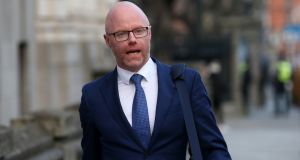 Minister for Health Stephen Donnelly will bring changes to the vaccination schedule to Cabinet on Tuesday, which will mean those with certain chronic health conditions will be offered earlier vaccinations. Photograph: Laura Hutton

Taoiseach Micheál Martin will announce an extension of the present lockdown for at least a month on Tuesday, once the Cabinet approves the updated plan for “living with Covid”.

Restrictions will be extended to April 5th, when there will be a review looking at the potential for easing the measures.

Despite hopes that certain social and economic activities could face some limited relaxations, sources said on Monday night that the high levels of disease and the priority of resuming education would likely limit room for manoeuvre elsewhere.

Thousands of students who attend special classes in mainstream primary and secondary schools returned to the classroom on Monday for the first time since before Christmas.

There will be a phased return of childcare, beginning with the resumption of the State’s Early Childhood Care and Education scheme on March 8th.

However, the construction sector will likely remain substantially closed aside from current exemptions, despite a last-minute push to allow work on private individual house completions.

Meanwhile, the Government is likely to back away from plans to allow some easing of outdoor restrictions, including non-contact training and socially distanced meetings.

Until last week, Ministers were actively discussing the limited resumption of such activity from early April but, despite strong arguments being made in favour of people’s mental health, continuing high case numbers and pressure on hospitals led to the move being jettisoned, and it is unlikely to be considered until after Easter.

Each step in the reopening plan will be followed by a break to assess the impact of resuming activities, while the new plan is unlikely to outline any “triggers” or specific dates for relaxing restrictions beyond those outlined for the resumption of schools.

Other restrictions on non-essential retail and the 5km exercise limit will remain in place.

There are growing concerns in Government about dwindling compliance with some aspects of Covid-19 regulations as fatigue sets in among the population. Data published on Monday shows that one-third of the population are not staying within 10km of their homes, and the level of adherence to restrictions has been decreasing during February.

Despite this, deputy chief medical officer Dr Ronan Glynn said on Monday that high levels of compliance by the majority were having a positive effect on hospitals, where infections in healthcare workers were falling alongside hospital outbreaks.

One further death of a Covid-19 patient was reported on Monday, bringing to 4,137 the total number of deaths in the pandemic. Another 686 cases of the disease were reported.

Changes to the vaccination schedule, being brought to Cabinet on Tuesday by Minister for Health Stephen Donnelly, will mean those with certain chronic health conditions will be offered earlier vaccinations. It is unlikely all those with chronic conditions – a cohort estimated to include 370,000 people – will be prioritised.

He is also likely to tell Cabinet colleagues that the State is in a position to administer 250,000 vaccines a week, once supplies come on-stream.