‘He was delighted...the routine is huge’ 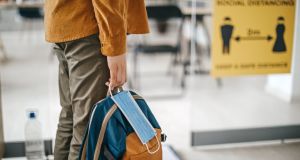 Thousands of students who attend special classes in mainstream primary and secondary schools returned to the classroom on Monday for the first time since before Christmas. Photograph: iStock

Thousands of students who attend special classes in mainstream primary and secondary schools returned to the classroom on Monday for the first time since before Christmas.

Miriam Kenny, chairperson of Involve Autism D6/D6W campaign group, said her son Jonathan (8), who is autistic, was “delighted” to return to his local school.

“He was fine, I collected him there, and he was delighted. He wouldn’t have a lot of communication, he wouldn’t be able to tell you but the routine for Jonathan would be huge, so he found being out of school very difficult,” she told The Irish Times.

Ms Kenny, who is a teacher, said it has been challenging juggling work and teaching her son.

“We had it sorted out that I would work for part of the time and then I would teach him, and I would go back to work myself in order to maintain the routine because if he didn’t maintain the routine it would have been really difficult for us because of his level of need,” Ms Kenny said.

“Online tuition is not possible for him, so I have to physically teach him and go through everything because he is not able for that.

“Jonathan wasn’t in a special class last year and he is in it this year. But if he wasn’t in that class he would still be at home now, along with other students with additional needs at the moment.

“His needs are high and there are children like him, particularly in this area, who are not back in school because of the lack of autism classes in the area.”

The Irish National Teachers’ Organisation (INTO), which represents teachers at primary level, said it had received mostly “positive feedback” from members on Monday.

“This was in no small part to the hard work of school principals and their colleagues to reopen their schools in line with Government advice,” an INTO spokesman said.

“While some members had expressed concerns last week regarding the public health landscape, the feedback we received today was that everyone in the school community adhered very strictly to the plans and mitigation measures.”

Earlier this month about 3,000 children returned to the State’s 124 special schools which reopened at 50 per cent capacity.

A formal announcement regarding the rest of students returning back to school is due to be made on Tuesday following a Cabinet meeting.

Under draft plans, primary schools would reopen from March 1st at the earliest, for junior infants, senior infants, first classes and second classes.

At second level, Leaving Cert students would be prioritised to return on the same date.

The remainder of primary school classes are expected to return a number of weeks later. However, the pace of this return will be subject to guidance by public health authorities.

At second level, the return of third and fifth years would likely be in a few weeks’ time, followed by the remainder of classes. However, given that schools close for the Easter holidays on March 26th, it seems likely that many of these students may not return until April 12th.