Covid-19 has changed Connemara’s season, removing the people that are its lifeblood 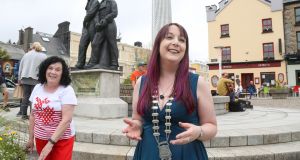 Bunowen pier is one of the Earth’s more beautiful final stops; the last on the road from Ballyconneely, with a backdrop of Connemara’s pastels of wild heather, a white sandy beach and sea-colours redolent of the Caribbean.

It is also home to the region’s oldest smokehouse. In normal years, Graham Roberts would have between 8,000 to 12,000 visitors passing through the factory established by his father more than 40 years ago.

This August, the factory is closed to all visitors because Mr Roberts is terrified by the thought of contamination, he admits. The nearby shop is open, but it has been quiet.

The smokehouse was badly damaged by a fire in 1990 and by a flood six years ago – “the roof was ripped off and my car left floating around the garden”, Mr Roberts recalls.

But unlike the pandemic, those were rational problems that could be solved. However, the coronavirus year of 2020 has sent a huge tremor of uncertainty through Connemara.

“This is the toughest. Because there is no end line,” says Mr Roberts, standing outside the smokehouse on a squally Wednesday morning on the pier in the spitting rain.

“For us anyway, we are very quiet here. It does seem to be busy around the place – partly because it has been so quiet for so long. But there are no coaches dropping off groups in town.

“The international market is . . . gone and we don’t know for how long. But the priority has to be that we get to the other side of this safely,” Mr Roberts says.

Even from a distance, the beechwood used in the smokehouse lingers in the air. Mr Robert’s father was firstly a fisherman and knew prime fish. Today, he’ll smoke and marinate salmon, herring, mackerel and tuna.

The fish are hand-filleted, dry salted, cured and then smoked in the beechwood. The notoriously temperamental weather moods dictate the pace, he goes on.

“On ideal conditions it is eight to 10 hours of smoking and the same drying. But on a wet squally day, the smoke gets pulled up the chimney faster. When it is wet it is humid and drying takes longer. But the end result is the same.”

The family business has no supermarket presence, supplying, instead, niche shops. But their export business is significant, built on a reputation of painstaking quality.

Rick Stein featured their smoked tuna almost 20years ago and Pierre Perret, the French singer and a long-time Connemara enthusiast, pronounced their fish the best in the world on national television.

Seventy per cent of their produce is exported to France. The smokehouse has 12 full-time staff. It is a local success story, a symbol of the enchantment of Connemara that has attracted foreign visitors.

Connemara’s tourism season is exactly that, seasonal. The disappearance of foreign visitors has brought a strange and unexpected return to the Irish-only tourist market, which is fine for the hotels and restaurants.

However, craft shops, gift shops and local tours are slanted towards continental and American visitors, while better roads help Irish visitors to come, but only for the day.

The recession after 2008/2009 hit heavily: “The thing about the recovery after 08/09 is that once the recovery hits, people became comfortable again,” says Colum Joyce, author and researcher with Sustainable Connemara.

“But when you have a dependency of 68 per cent based on tourism as Connemara does: let’s put it like this, Covid is showing what that does to an economy. It removes the people,” he says.

So what lies ahead? Air travel is not expected to get back to normal until 2024. The full impact of a vaccine, according to the deputy head for the US Centre for Disease Control in the United States, may not be felt until the end of 2022.

“Connemara tourism has France and Ireland accounting for 52 per cent of the total. But this is where it gets interesting. Connemara has a whole series of opportunities now,” says Mr Joyce, who grew up in Clifden.

Tourism evolved in an accidental, ambling way in Connemara. In the late 1960s and the first half of the 1970s, it was rare for pubs to serve a sandwich, let alone food.

Bed and breakfasts were personalised, with families letting rooms. “It changed when people started travelling, really,” Mr Joyce says, adding that the French and Germans began arriving after Ireland’s entry to the European Economic Community.

“You could see it in the rise in sea angling and people coming in for specific events like the Connemara pony show – there are now more than 3,000 Connemara pony clubs across the world,” he goes on.

New holiday homes grew rapidly during the Celtic Tiger, causing annoyance, he says: “It was far more difficult for a local to get planning permission than it was for someone from outside to build a second home,” Mr Joyce says.

“They would see homes going up on the skyline. The Night of the Big Wind [in 1839] told Connemara people you don’t build on the skyline unless you want to wake up looking at the stars.”

New homes brought more people, even if seasonally. Heather Greer, an energetic writer, photographer and sailor in her early 70s, retired to Claddaghduff in 2006 after decades of visiting.

Today she is told that she is “a local at this stage” by friends: “You are not though,” she says brightly. “You are always a blow-in.” Locals have the family networks, the link with history. “You will never be completely privy to that.”

Her perspective – from Connemara, though not quite of it – makes her think about the seasonal tide of visitors which recedes dramatically each autumn, leaving the place deserted during months of shortening daylight.

“Well. It’s just a very special place. Something about the remoteness and wildness of it. The beauty that you are surrounded by. And the peace and quiet is fantastic.

“You certainly don’t come here for the weather. It can be hard to live here, too. The winters are very long. And the summers can be unreliable. You have to be self-sufficient to live here.”

This year’s lockdown in Connemara and the accompanying dreamy spell of weather did something unusual, since it gave the place in full bloom to the year-round residents.

“The birds sang five times louder,” Ms Greer laughed. “It wasn’t the summer but it felt like it. And people had a taste of what it was like with no visitors . . . and it probably tasted good to a lot of people.”

The old model of tourism will change: “What we have is unsustainable. Hordes of people flying in and out of countries on holidays and burning up petrol. There has been a gross over-reliance on quantity.

“The over-riding metric for success seems to be numbers. There is an alternative where you limit the numbers but go for people who will come and spend money. It may mean fewer people and higher prices.

“Or a Connemara with more things for them to do,” says Ms Greer, who, before the virus, was involved in efforts to try to kick-start a conversation about building a marina in Cleggan.

“Look at Kinsale or Baltimore. A large part is fed by visiting yachts. One of the great barriers here is rounding Slyne Head and having no easy-to-access harbour where you are safe in all weathers.

Cleggan is ideal, she argues: “There been local conversations about a marina but they are straws in the wind. But I do feel the future for tourism here is in activity holidays.”

Which is not to say that the current summer life – summer homes; secluded prestige hotels; the oil-painting enthusiasts and the burgeoning food culture – cannot continue to thrive.

Right now – the August bank holiday, the peak of the usual season – everyone involved in tourism is understandably keen to salvage what they can from this blighted year.

Because once autumn comes – certainly post-Halloween, the tourism season will stop. Maybe it is then when the real Connemara – the place that bewitched Tim Robinson, who died in London from the virus – returns.

By lunchtime on Wednesday, the rain had come heavily, though an art auction in a marquee in Ballyconneely was busy. Everywhere, people scuttled indoors. Cyclists disappeared, leaving the streets of Roundstone empty.

This was an afternoon for finding one of those fabled west of Ireland pubs, with a turf fire and settling down with a good book. But, of course, the simple pleasure of a walk-in pub has been suspended.

Everything is off-kilter: despite the best intentions and the usual local hospitality, the usual summer energy and freedom from day-to-day cares is not quite there.

A lone angler cut a heroic figure in the darkening four o’clock as he stood with his rod beside a swollen river down from the iconic Angler’s Return guest house.

Mr Joyce is hopeful that the virus will generate winter conversations about how Connemara can reinvent itself in a way that makes it less reliant on the vagaries of the old tourist model.

“There are unexplored opportunities. For instance, people say nothing grows here. But if you take foliage, the bits of greenery in bouquets, that is a €6 billion-a-year market. And it grows like weed in Connemara.

“Dogwood, hazel, willow, nobody has looked at how you exploit this. The area has the longest growing season in Europe. Something you could grow in Connemara very well is tea.

“Then there is natural stuff like blackberries. There are going to be billions of euros available for anyone with the slightest imagination and who can fit into the environmental push. There is potential.”

Back in Aillebrack, Mr Roberts has clear memories of the size and variety of fish his father and other local fishermen boxed up at the pier in his boyhood, and the changes 40 years have wrought.

“You’d see a turbot draped over the side of the crate. Hundreds and hundreds of finest prime fish. Much of that has gone. Overfishing. Gill nets probably were a disastrous thing for fishing.”

Environmentally-conscious, Roberts gets worked up about litter – abandoned coffee cups, dog litter left in plastic bags. “That always disgusts me. There is a bit of a feckless approach.

“But I do think people in general are becoming more conscious of the environment. And I think everyone here is delighted to see visitors coming here again and enjoying themselves.”

The pandemic will change how tourism works, he says, as he holds up his hands up to the seascape before us, “When you look at the place we live in, it is unbelievable.

“I promise you, I do not take this place for granted. I am thankful for it every day. It is easy to forget but the things we have here – the beautiful beaches, the clean water, mountains and lakes . . . we need to protect that.”