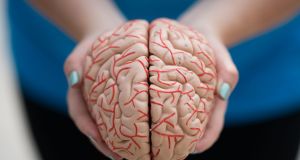 Researchers are edging closer towards a blood test that can detect Alzheimer’s disease even before symptoms appear. Photograph: Matthew Horwood/Getty

Researchers are edging closer towards a blood test that can detect Alzheimer’s disease even before symptoms appear.

Scientists from the US and Europe say data indicates that levels of a specific form of tau, one of the hallmark proteins of Alzheimer’s disease, can be detected in blood.

The research suggests that levels of p-tau217 are elevated during the early stages of the disease.

Scientists reported results of multiple studies on advances in blood tests for abnormal versions of the tau protein.

One may be able to detect changes in the brain 20 years before dementia symptoms occur.

Changes in brain proteins amyloid and tau, and their formation into clumps known as plaques and tangles respectively, are defining physical features of Alzheimer’s disease in the brain.

Build-up of tau tangles is thought to correlate closely with cognitive decline.

Currently, scans and tests of spinal fluid are the only ways to detect the brain changes that occur before Alzheimer’s dementia symptoms appear.

But these methods are expensive and invasive.

In a study presented at the Alzheimer’s Association International Conference 2020, researchers, led by Dr Oskar Hansson, from Lund University in Sweden, also identified a highly accurate, blood-based biomarker for the detection of Alzheimer’s disease by measuring levels of p-tau217 in blood.

They studied three different cohorts of more than 1,400 cases, and found that blood p-tau217 could distinguish Alzheimer’s from other neurodegenerative disorders with diagnostic accuracy between 89 per cent and 98 per cent.

Dr Hansson said: “This test, once verified and confirmed, opens the possibility of early diagnosis of Alzheimer’s before the dementia stage, which is very important for clinical trials evaluating novel therapies that might stop or slow down the disease process.”

Researchers in the US suspected that p-tau217 might also be present in the blood of Alzheimer’s patients, albeit at very low levels that would make it difficult to detect.

Randall Bateman, professor of neurology at Washington University School of Medicine in St Louis, said: “We therefore wanted to quantify the levels of different tau proteins, especially p-tau217, in the blood and compare them with amyloid pathology and onset of dementia to assess their potential as blood-based Alzheimer’s disease biomarkers.”

Dr Bateman, Nicolas Barthelemy and colleagues found that p-tau217 accumulates in the cerebrospinal fluid of Alzheimer’s patients before the onset of cognitive symptoms.

It increases with disease progression, and can accurately predict the formation of amyloid plaques, according to the study published in the Journal of Experimental Medicine.

The researchers developed a mass spectrometry-based method to measure the amount of p-tau217 and other tau fragments in as little as 4ml of blood.

They found that, similar to p-tau217 levels in cerebrospinal fluid, p-tau217 levels in the blood were extremely low in healthy volunteers but elevated in patients with amyloid plaques, even in those who had yet to develop cognitive symptoms.

Dr Bateman said: “Our findings support the idea that tau isoforms in the blood are potentially useful for detecting and diagnosing Alzheimer’s disease pathology.