Commissioner urges pensions for those injured in Troubles 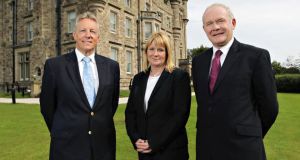 A report by Northern Ireland’s outgoing victims’ commissioner Kathryn Stone (centre) proposing a pension for everyone who was severely injured during the Troubles has been sent to First Minister Peter Robinson and Deputy First Minister Martin McGuinness. Photograph: Brian Thompson/Press Eye/PA Wire

The North’s outgoing victims’ commissioner Kathryn Stone has proposed a pension for everyone who was severely injured during the Troubles - an idea which has resurrected the controversy over who should be regarded as a victim.

Her paper, Dealing with the Past, is now in the hands of First Minister Peter Robinson and Deputy First Minister Martin McGuinness who must decide whether to follow up on her proposal.

Ms Stone, who is standing down next month, has also called for arrangements where apologies could be issued to all victims from those who perpetrated killings, maiming and injuries.

And in suggestions which are in line with the proposals contained in the stalled Richard Haass paper on how to deal with the past, parades and flags she also called for the formation of an Information Retrieval Commission and a Historical Investigations Unit.

Any apologies from representatives of groups such as the IRA, the UVF, the UDA and the British state would be dealt with through her proposed Acknowledgement Unit, which would come under the aegis of the British and Irish governments.

Ms Stone’s paper comes as Dublin, London and Washington consider ways to get the Northern parties, particularly antagonistic unionist politicians, to re-engage with the Haass proposals sometime after the European and local elections towards the end of this month.

Under current legislation there is no distinction between paramilitaries who were killed during the Troubles and other victims. This is an issue which has particularly exercised unionists with the DUP seeking to change the legislation at Westminster to exclude former paramilitaries and their families.

Sinn Fein contend there “must be no hierarchy of victims” while the SDLP argues that the issue is complex and requires sensitive handling.

Ms Stone said that that while there “may be some dissenting voices, these recommendations represent real and practical actions that will meet the needs of victims and survivors as they have expressed them”.

“I believe there is the political will to meet the needs of victims and survivors. That needs to be translated into action and that action must be now,” she urged.

The proposals have reawakened memories of the recommendation in the Eames-Bradley proposals on the past where the families of all those killed in the Troubles, including families of paramilitaries, would receive a £12,000 (€14,680) reconciliation payment - a proposal seen by some as wrecking any objective appraisal of those detailed proposals.

Ms Stone said the DUP First Minister and Sinn Fein Deputy First Minister, who in any case are divided on the issue, could set eligibility criteria for who should receive special pensions. Some unionist victims groups and politicians however spoke out against such payments.

Traditional Unionist Voice leader Jim Allister said there should be “no Provo pensions”. Any proposed pension should exclude those injured while engaged in terrorism or carrying a relevant conviction, he said.

“There should be no question of those injured while carrying out acts of terrorism receiving a pension. The idea that terrorists injured while visiting death and destruction upon others should receive a payout from the state rightly appalled innocent victims the length and breadth of Northern Ireland when it was suggested in Eames-Bradley,” added Mr Allister.

“There can be no Provo pension for Shankill bomber Seán Kelly. He’s a victim maker. Not a victim,” he said.

Kenny Donaldson, of the unionist umbrella victims group, Innocent Victims United, said he would study the document in detail but added that it was “warped and deeply miscalculated” in offering pensions to “perpetrators”.

He said the acknowledgements unit proposed would have “zero credibility” unless there was universal acceptance that “the use of violence in the furtherance of a so-called political objective is not and was not ever justified”.

Victims campaigner William Frazer there was a concerted attempt to “revamp and promote the failed” Eames-Bradley report.