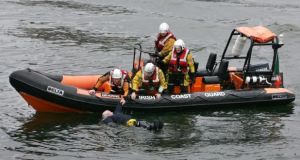 In a statement the Irish Coast Guard said it is ‘actively managing the situation and is liaising closely with all key stakeholders and Search and Rescue (SAR) providers’. File photograph: Matt Kavanagh

The Irish Coast Guard has withdrawn its in-shore rescue boats from service because of a reported malfunction with life-jackets.

The announcement means that in-shore boats have been withdrawn from 23 locations around the country was made on Friday.

In a statement the Irish Coast Guard said it is “actively managing the situation and is liaising closely with all key stakeholders and Search and Rescue (SAR) providers”.

The order means that volunteers at 23 of the service’s 44 stations that are equipped with Delta RIBs (rigid inflatable boats) and smaller D-Class boats, cannot launch for rescue operations until further notice.

In an email sent to unit officers-in-charge (OICs) around the country on Friday afternoon, the Irish Coast Guard said: “An investigation is under way into the recent malfunctioning of Rescue 400 lifejackets. Specifically, the 275N section of the lifejacket failed to fully function when activated.”

The communication added: “In support of the investigation, a risk assessment of this critical piece of PPE (personal protection equipment) has determined that use of Rescue 400 lifejackets is to be suspended with immediate effect. This, in turn, means that all Coast Guard boat operations are also suspended with immediate effect. This includes all training and operations on Coast Guard boats.”

The email continued: “We (Irish Coast Guard) will be discussing this issue with the NMCI today to clarify arrangements for upcoming PST courses. As of now, all PST courses will continue as planned due to the stringent control measures in place in the college. However, if this changes we will inform you immediately.”

“Possible resolutions to this issue are being actively pursued in order to re-commence boat operations as quickly as possible and you will be updated with progress throughout. I trust you understand that this action is being taken in compliance with our SAR Assurance obligations as set out in the National SAR Plan to ensure the safety of boat crew,” the email concluded.

According to sources however, serious concerns had been expressed about volunteer’s lifejackets several years ago. It’s understood the problem with inflation of the lifejackets was brought to the attention of Coast Guard management on numerous occasions in recent years.

“This action has been taken following a reported malfunction of a key piece of personal protective equipment. The Irish Coast Guard is actively managing the situation and is liaising closely with all key stakeholders and Search and Rescue (SAR) providers.

The Coast Guard is evaluating all options and is confident of a timely resolution of the matter,” the statement concluded.