It was a matter for Dun Laoghaire TD if she ‘looks to take any further action’, Minister says 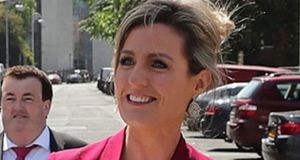 Maria Bailey will not be able to attempt to retain her seat as a party candidate in the constituency in next year’s election after being deselected at a party executive council meeting on Thursday night. Photograph: Niall Carson/PA

Minister for Finance Paschal Donohoe has insisted the process involved in the deselection of Fine Gael TD Maria Bailey from the Dun Laoghaire general election ticket was democratic.

He said it was “very much a matter for Deputy Bailey regarding if she looks to take any further action” on her deselection but that she had handled their discussion in a “dignified and composed way”.

The Dún Laoghaire deputy will not be able to attempt to retain her seat as a party candidate in the constituency in next year’s election after being deselected at a party executive council meeting on Thursday night.

Ms Bailey has been in the spotlight following the negative publicity that surrounded her decision to pursue, and later withdraw, a personal injuries claim over a fall from a swing in Dublin’s Dean Hotel.

Mr Donohoe met Ms Bailey in advance of Thursday nights’ meeting. “It was a difficult meeting with her and made her points to me in an exceptionally professional and dignified way,” he said.

Asked if it was fair that Ms Bailey was effectively punished a second time when she had already been sanctioned, Mr Donohoe said that “last night was a democratic decision that was made by the executive council of Fine Gael in relation to Ms Bailey’s candidacy for our party”.

It was made after Ms Bailey made a presentation to the executive council on foot of a proposal from the party leader, he said.

The Minister said he met Ms Bailey earlier in the week and informed her of the process would be and the proposal that was likely to go but the matter was dealt with by a democratically by the Dun Laoghaire oranisation and by the party nationally.

Asked about Ms Bailey’s comments in her statement last night that Mr Donohoe had effectively told her she would be taken off the ticket, the Minister replied that he told Ms Bailey that the decision making process rested with the executive council that a proposal would be going to the council about her candidacy.

“I felt it was appropriate that before that proposal goes that Deputy Bailey be aware of it and that was the procedure that was followed,” he said.

Mr Donohoe added that he was conscious that “we have a member of Dail Eireann who worked very hard to get elected and to represent her constituency. It has been a matter for great public debate and strong public feeling but it was also something that Deputy Bailey has had to live through and as I comment I’m very conscious of it.”

Dún Laoghaire Fine Gael members had voted at a meeting on Halloween night for a motion asking the party hierarchy to urgently review the constituency’s general election ticket, putting pressure on Mr Varadkar to strip Ms Bailey of the candidacy.Taoiseach Leo Varadkar previously removed her from the position of chair of the Oireachtas housing committee.

In her statement on Thusday night Ms Bailey said she was advised of the decision to deselect her on Wednesday when she attended a meeting with Mr Donohoe and the Fine Gael general secretary Tom Curran.

She said she was told that her deselection was based on the motion passed by the Dún Laoghaire Fine Gael constituency and that she “raised serious issues regarding the procedure of that meeting”.

Ms Bailey said she was “disappointed” with the decision. “An Taoiseach has decided to sanction me again and I have been deleted as a candidate for the next general election in Dún Laoghaire,” the letter said.

She said she remains a “proud member” of the party, a comment that will be seen as an indication that she will not seek to run as an Independent TD, although she did not specifically spell this out in the letter.

“My personal injury claim which dates back to 2015 was prior to me becoming a TD: however, I was a Fine Gael councillor at the time,” Ms Bailey added.

“An Taoiseach conducted an internal review of my case and I was sanctioned in July. I have apologised for any difficulties I may have caused. An Taoiseach stated to me in an email in July that he considered the matter closed and wanted us all to move on.”

“I had hoped to be able to move on and work hard to rebuild my reputation but at every turn there have been anonymous sources trying to reignite the story around me. I have not given another statement since July or commented since May in the interest of the party, except to say this is an internal party matter.

“I would like to thank the national executive for affording me, at my request, the opportunity to speak to them. I am a proud member of Fine Gael and I would also like to thank my fellow Fine Gael members for their support. I will continue to fulfill my role as a public representative.”