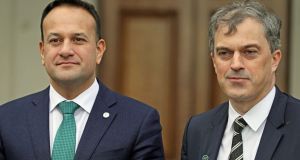 Northern Ireland will face new elections to the Stormont assembly if the parties do not agree to reform the assembly and the power-sharing executive by January 13th, the Northern Secretary Julian Smith has said.

Speaking at a meeting of the British-Irish Council at Farmleigh House in Dublin on Friday, Mr Smith said he believed the Northern parties wanted to revive the institutions, but said if that proved impossible by January 13th, a date set down in law, elections would have to be called.

“The deadline on January 13th is a real deadline,” Mr Smith said. “The legislation that gives civil servants in Northern Ireland guidance on how to take political decisions comes to an end on that date, and under the duty on the Secretary of State to call elections that deadline means that if we don’t get Stormont up and running again by then, Northern Ireland citizens will have both a general election in December and assembly elections soon after January 13th.”

Mr Smith said leaders of the Northern parties needed to “take the leap in the interest of Northern Ireland citizens”. People were saying this to him in the North “day in, day out”.

“But it is inevitable that if that legislation comes to an end...there is a duty to call an election.”

He said such an election would make “a failure of every politician in Northern Ireland” and as soon as the election was over they must “sort out the outstanding issues and get back into power”.

Taoiseach Leo Varadkar said the Irish and British governments would need to allow the British elections to play out before seeing if the leaders of the Northern parties could be brought together to reinstitute the power-sharing institutions.

Sinn Féin deputy leader Michelle O’Neill, responding to Mr Smith’s comments, said she believes there will be an opportunity in the New Year to restore the North’s power-sharing Assembly.

Sinn Féin clearly “wants a process that actually delivers an outcome, that sees an Assembly restored, that is our aim”, Ms O’Neill told reporters at the party’s ardfheis at the Millennium Forum in Derry on Friday night.

“In the New Year we believe after this (Westminster general) election that there is an opportunity to have a process that actually does so,” she said.

But she said if Mr Smith did call an Assembly election “then Sinn Fein will contest the election on a very firm basis”.

“The current political impasse is unsustainable and unacceptable,” she added.

An agreed statement was issued saying the ministers had discussed Brexit and related issues, as well as “topics of mutual interest such as the economy and trade and ongoing relations with the EU”.

Despite the absence of representatives from Stormont, the council discussed Northern Ireland and the possible restoration of the institutions.

The next meeting of the council is in six months in Scotland.