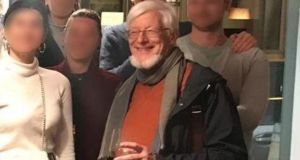 It is not unusual to hear praise for the dead. But the praise yesterday from students and colleagues of John Dowling, the 66-year-old Irish lecturer murdered by an angry former student in Paris on Wednesday, made it clear that he was an exceptional man.

A photograph of Dowling, taken at a social event with international students on the eve of his murder, hangs in the foyer of the Pôle Universitaire Léonard de Vinci with the words “Homage to John Dowling.”

Dowling was to have taught for six hours on Wednesday, and only had time to pop over to the local Monoprix store to grab a sandwich. His last words to a colleague were: “What can I get for you?”

On the esplanade outside, Dowling was accosted by a former student, a Pakistani citizen, expelled a year ago. “I don’t think [he] really knew John,” said David Dupuis, who was Dowling’s student and later a friend and colleague.

Following brief words, the man drew a knife and stabbed Dowling repeatedly in the throat. “Students overwhelmed [the assailant],” Dupuis said. “One of them tore off his shirt to try to stanch John’s blood. When I got here, the firemen were trying to resuscitate him.”

A memorial of tea-lights and roses has sprung up on the site of Dowling’s murder. An Irish Tricolour waves from a small tree. “Thank you, John,” says a sign.

From interviews, an image of Dowling emerges as a humorous, energetic and intelligent man, who loved Ireland, music, poetry, theatre, rugby and languages. Most of all, he loved teaching. Yet he was as discreet as he was generous.

Even those who knew him for years knew little about his private life, whether he was married, or had children. His partner was in touch with the university seeking psychological counselling, though nothing else is known.

The Emerald Cultural Institute in Rathgar, where Dowling taught English during his summer holidays, later said he had a sister in Dublin, owned a house in Donegal and intended to retire in Italy.

His CV was startlingly broad: ancient Greek and Italian at Trinity College Dublin, followed by time in Florence in 1987, with an Italian scholarship. Later, he won a Stanford scholarship, earning a master’s degree in classics. He never spoke of his accolades.

Hundreds of staff and students crowded into the university’s foyer at 12.15pm on Thursday, 24 hours after the killing, to honour him. Former students and parents have been eager with offers to contribute to a fund in his honour.

The tragedy of Dowling’s murder could be read on faces during a minute’s silence. I thought of Kipling’s Arithmetic on the Frontier, how “Two thousand pounds of education/Drops to a 10-rupee jezail.” A piano played Amhrán na bhFiann and the crowd applauded.

“He was adorable, always good-humoured and very, very intelligent,” said former student Anne Bernard. “He was full of jokes, plays on words. Sometimes the classroom laughed so hard that people would knock on the door and ask us to be quiet.”

Many wept. “When he got into an elevator with you, it was as if there were birds and butterflies in the lift,” one teacher said.

Later, Dupuis said he believed Dowling had learned to whistle as a shepherd in Ireland, studied theatre and taught in London when it was difficult for an Irishman, during the Troubles.

“He had a presence like no other . . . He swept you off your feet and transported you in time . . . You were captivated,” said Dupuis, imitating Dowling’s presentation of the Iliad and the Odyssey, and the way he paced around the room.

“Everything you associate with joy, John did it: singing, smiling, laughing, and whistling. He loved teaching. He loved what he taught and the people he taught it to,” he said.

“I want to remember him not for what happened yesterday,but for all the moments we shared. As John said: ‘It’s not the end of the story that matters. We know Achilles died. It’s what happens in between.’”