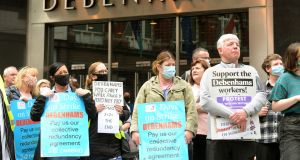 Former Debenhams workers have overwhelmingly rejected a package of supports proposed by the chairman of the Labour Court in response to the liquidation of the retailers’s Irish operation last year. Photograph: Dara Mac Donaill/The Irish Times.

The Government should convert a €3 million fund proposed for training and re-skilling former workers at Debenhams into cash payments for the personnel involved, their trade union has said.

The move came after the former Debenhams workers overwhelmingly rejected a package of supports proposed by the chairman of the Labour Court in response to the liquidation of the retailer’s Irish operation last year.

Mandate said the provision of direct cash payments, and a commitment by the Government to new legislation which would protect workers affected by company liquidations, could help to end the 10-month dispute.

Mandate said the proposals had been rejected by 91 per cent of workers who took part in a ballot. It said 430 former Debenhams’ employees voted in the ballot with 393 rejecting the initiative and 37 supporting it.

The offer proposed the establishment by Government of a €3 million training, upskilling and business start-up fund to help the former workers at the retailer.

The proposals were part of a recommendation drawn up by mediator and Labour Court chairman Kevin Foley following extensive engagement with the workers, Mandate, liquidators KPMG and various Government agencies in an attempt to resolve the dispute over redundancy payments.

In a letter to Taoiseach Micheál Martin on Wednesday after the vote, the general secretary of Mandate Gerry Light said: “It is not the blind desire of our members to remain on picket lines during a national health emergency in the middle of winter but they are absolutely determined to do so until they achieve what they believe to be just and fair settlement to their dispute.”

He continued: “First, they believe once the Government conceded the principle of making €3million available for a training/education support fund at the very least this money could have been offered as a direct cash payment. There remains a very strong possibility that if a decision was to be made in the future to make the payment in this way then the dispute could be brought to an end.

“Second, the high level of rejection was also driven by utter despair and rejection of the Government’s failure to meaningfully start the process which would allow for the introduction of new legislation that would afford greater protection to workers in the future who are unfortunate enough to find themselves in the same predicament as the ex Debenhams Irish workforce.

Mr Foley found that a 2016 collective agreement for enhanced redundancy payments for staff no longer legally applied and that the current legal framework limited the scope for the liquidators to contribute to a resolution of the dispute which has been running since last spring.

He maintained that the main preferential creditors of the Debenhams Ireland liquidation were the Department of Social Protection and the Revenue Commissioners, with a debt owed of approximately €18 million. The State has paid out €13 million in statutory entitlements to the former employees.