Circus in crisis: Even if the tent goes up, the problems won’t go away

Performers at Circus Gerbola have been locked down since restrictions were implemented and are facing an uncertain future as social distancing will negatively impact future sales. Video: Enda O'Dowd 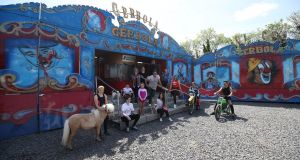 Mikey Gerbola with his wife, Tara, family and cast at their winter base on the Gerbola family farm near Kells, Co Meath. Photograph: Nick Bradshaw

The Circus Gerbola trailers, trampolines and trapeze swings which normally travel the country’s roads on days like today are locked down on a small Co Meath farm as sad clowns and grounded acrobats kick their heels in frustration.

Instead of the heady cocktail of laughter, grease paint and death-defying stunts, the performers have been trying to entertain themselves with more pedestrian pursuits such as gardening and strolling country roads in full bloom.

It’s been a struggle.

That struggle started in March when the circus was setting up in Carrigaline in Co Cork ahead of a St Patrick’s weekend run. Word reached the performers that they were to shut as part of nationwide efforts to contain the spread of Covid-19.

The tent was dismantled, the trailers loaded and off they headed to their winter base on the Gerbola family farm near Kells.

“Our performers wanted to go to their homes across Europe to be with their families because they were afraid of what was coming. Many were able to get away but some couldn’t and they’re here with us and for them it has been horrendous,” circus owner Tara Gerbola says.

As she talks in a farmyard barn, two small children bounce on a trampoline behind her as one woman juggles a dizzying array of balls nearby and another walks a tightrope.

“They have to keep practising, they’ve no choice,” Gerbola says of the performers. “Their bodies are used to this and they can’t just stop. They practise every day even though we have no shows, it’s hard on them.”

It’s hard on the owners too. “It’s so strange to be here on a summer’s day when we’d normally be on the road, we’re never here now,” she says. “It’s such a weird time.”

She has been watching what has been happening to circus communities across Europe. “Some are much worse off and have had to stay wherever they were when lockdown was declared. They were stuck, we’re grateful to have our farm and a place we could come home to.”

Under the phased exit from Covid-19 restrictions, the circus may be able to re-open on August 10th. “We don’t even know if that will happen because everything keeps changing,” Gerbola says.

Even if the tent goes up, the problems won’t go away. “We’ll have to reduce capacity by two-thirds for social distancing and our insurance is climbing. This year it jumped 78 per cent. When that happened we’d a big decision to make about continuing. But we’ve put so much into this, you’re talking about a lifetime’s work.”

Several lifetimes’ work in fact. The Gerbolas’ circus roots stretch back eight generations and their family tree takes in some of the most well-known names in the business, including the Fossetts. Tara Gerbola and her husband, Mikey, grew up with travelling circuses – he was a clown, she was a trapeze artist.

Then she ran away from the circus to join an accounts department in Tesco. “I couldn’t stand it there so left after a year,” she says. “That was in 2001, the year we started our own circus.”

It faces an existential threat now. “My heart tells me we will survive, we have survived so many things in the past,” she says.

Outside the barn, performers are goofing around. Denisa Cristea, from Romania, specialises in “aerial work and fast costume changes” and when she joined the circus in February she didn’t sign up to spend her summer on an Irish farm.

She is blunt in her assessment of how it’s going.

“It’s really boring,” she says. “In circus life you always have adventures, something is always going on and we move around a lot. But now we are in just one place and there’s not much to do. I’m making a lot of TikTok videos and practising my make-up but I can’t wait to get back in the ring.”