Bake-off: Matt Damon bids farewell to bakery as he prepares to leave Ireland 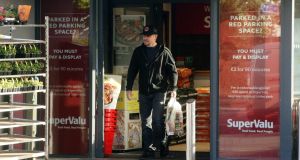 Dalkey’s Country Bake store posted a photo of Matt Damon on Facebook with the message “Our last visit from Matt and his family for a while. Safe travels! Thanks for bringing some excitement to Dalkey during this pandemic!” Above, Damon shopping at his local SuperValu supermarket while living in Dalkey, Co Dublin. Photograph: Padraig O’Reilly

Hollywood actor Matt Damon and his family are reported to be heading home to the United States after spending the Covid-19 lockdown in the south Dublin suburb of Dalkey.

Dalkey’s Country Bake store, where Damon had become a regular customer, posted on Wednesday that the American actor and his family had stopped by for their final visit before leaving Ireland.

The Dublin bakery posted a photo of Damon on Facebook with the message “Our last visit from Matt and his family for a while. Safe travels! Thanks for bringing some excitement to Dalkey during this pandemic!”

Comments underneath the post wished Damon a safe trip home, with one Facebook user thanking him for putting “Dalkey on the world map”.

Damon was in Ireland shooting scenes for an upcoming movie, The Last Duel, directed by Ridley Scott, when the country went into lockdown in mid-March. Instead of catching a flight back to the US, Damon chose to settle into the Dalkey community – where he and his family are reportedly renting the retired Formula 1 driver Eddie Irvine’s former bachelor pad – and wait out the pandemic on Irish soil.

The actor’s stay in Dublin, and subsequent photo which showed Damon wearing a baseball hat and holding a SuperValu bag, prompted an article by the New York Times about the local reaction to the A-lister’s presence in the affluent Dublin seaside suburb.

Much to the joy of Dublin station Spin 1038, Damon appeared on the Fully Charged weekday show earlier this month and spoke about living in Ireland during the pandemic.

More recently he surprised local schoolgirls by sharing a video of himself congratulating the graduation class of the secondary school, Loreto Abbey Dalkey.

“You guys are awesome,” he told the girls, adding that he was “sorry” they had to study and graduate “from quarantine”. “Congratulations – what an achievement. Good for you guys. I’m thinking about you.”

1 People with foreign accents should not be ‘assumed’ tourists - NPHET
2 US passengers fly into Dublin: ‘I’m here for six days. I guess I’ll have to stay inside’
3 Maureen Dowd: Biden has his limitations but he’s no Trump
4 ‘I thought it was a hoax’: Patient dies after Texas Covid party
5 Immunity to Covid-19 could be lost in months, study suggests
Real news has value SUBSCRIBE