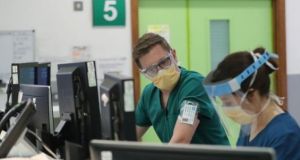 Two further coronavirus-related deaths were reported in Northern Ireland on Wednesday, bringing the total number of fatalities in the North to 516.

An additional 845 people were tested for coronavirus in the last 24-hour period, resulting in 26 new positive cases. In total, 4,663 individuals in the North have tested positive for coronavirus to date.

On Tuesday the North’s Department of Health reported no new deaths from coronavirus for the first time since March. Health minister Robin Swann said it was “a clear sign of the progress that has been made.”

Meanwhile, the number of fines handed out by police for breaches of social distancing guidelines dropped by more than 90 per cent during May, according to figures from the Police Service of Northern Ireland (PSNI).

Thirty people were fined for breaking the guidance between May 1st and May 26th, compared to 374 fines issued until April 24th.

The number of community resolution notices handed out also dropped significantly, falling from 615 to 92.

Ulster Unionist MLA Doug Beattie said the legislation had not been “as clear as it should have been” for police officers, and as time went on “police have become more comfortable with the legislation, with politicians slightly changing the legislation to make it more sensible, [and] the situation has changed.”

He said he did not believe the fall was due to greater compliance. “If I look at our streets, our roads, our shops, there are more people out there, less social distancing, a lot of people flouting that legislation.

Data from the North’s Department of Infrastructure (DoI) has shown a steady increase in traffic volume since lockdown began.

From a low of minus 74 per cent on the weekend of April 11th-12th compared to baseline traffic flows, levels have crept up. Last weekend, May 23rd-24th, traffic levels were recorded as minus 46 per cent of the baseline.

Weekly crime figures in Northern Ireland rose again for the fourth successive week to their highest level since the lockdown.

The PSNI recorded 1,629 crimes in the week ending May 17th, according to data released on Wednesday by the Northern Ireland Statistics and Research Agency, 18 more than the previous week.

Overall, the number of crimes recorded by police since the beginning of the lockdown is 27 per cent lower than during the same period last year.

However the volume of domestic abuse calls received by police continues to be higher than the weekly average.

According to th Northern Ireland Statistics and Research Agency (NISRA) 636 calls were made to police between 20th-26th May, 66 more than the weekly average of 570 (based on the 12 months to February 2020).

Meanwhile the haulage industry in Northern Ireland has warned that some firms are “on their knees” and “will fail” this year due to the continuing impact of the coronavirus lockdown.

Seamus Leheny, policy manager with the Freight Transport Association, told the Northern Executive’s economy committee that some logistics companies had seen 90 per cent of their trade vanish, and others were paying £500 per week in finance costs for vehicles which were parked up in yards.

Some hauliers, he said, were returning to Northern Ireland from Great Britain with empty lorries because the closure of most shops means there is little demand for many goods.

However he also said some freight companies had been relatively unaffected and others had seen an increase in trade. “It comes down to the lottery of who your client base is.”

He called for greater flexibility in the government’s furlough scheme to allow employees to come back to work part-time, as well as the reform of insolvency rules to make it quicker and easier for those bankrupted as a result of the lockdown to start again.

Mr Leheny also criticised ferry companies - which received a £17m support package from Stormont and the UK government - for not passing on savings in the cost of fuel on Irish Sea crossings.

“There is a lot of empty running, a lot of trailers coming back to Northern Ireland empty but they are still paying the fees they have always paid,” he said. - Additional reporting PA.