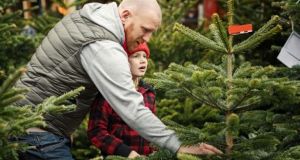 Nordmann Firs – which are the most popular Christmas tree – absorb carbon from the air while they’re growing. Photograph: iStock

Christmas tree sales have grown strongly this year as people appear to have turned their back on plastic trees imported from thousands of miles away and sought out more sustainable options to make their homes festive for the holidays.

The Irish Christmas Tree Growers (ICTG) umbrella group said that around 450,000 Irish trees are currently standing in living rooms across Ireland with a further 250,000 making their way to Europe, mostly the UK, France and German.

Sales have jumped by over 10 per cent in the last two years and ICTG chairman Christy Kavanagh hailed a bumper year and said the business was now worth in excess of €20 million to the local economy.

“We had a good harvest this year as growing conditions have been particularly optimal, trees are displaying a good colour. And it is great to see the public supporting their local economy by choosing Irish grown Christmas trees,” he said.

One person who has benefitted from a switch to real trees is Theo Lambton. He set up a tree delivery and collection service called Fir in Dublin just over three years ago.

He sources all his trees in Wicklow and he told The Irish Times that 2019 will be the company’s best year. He attributes the surge in sales to more disposable income and a greater interest in sustainability.

“I think people have more money to spend but an awareness of the environmental impact of buying a plastic tree made in China with plastics and harmful chemicals and shipped thousands of miles leaving a huge carbon footprint has made people see the value of real trees,” he said.

He said that with real trees which are properly recycled there “is virtually no waste and the carbon footprint is almost zero” although that does depend on how far a person drives to collect their tree.

With Fir, people don’t drive and Mr Lambton has delivered more than 700 trees this season so far.

He said his start-up company has got around the difficulties people might have with somebody else choosing their tree by giving people options when they order online.

For anyone wondering why their Christmas trees don’t smell as strongly as they may have done in the past, the answer may lie with a shift in the type of trees sold in the Irish market.

In the past the Norway Spruce was popular but it also shed its needles very fast. It was replaced in many Irish houses by the Noble Fir with is high sap content and strong odour and resilient needles. Its shape was frequently less than ideal which lead to its replacement by the more aesthetically pleasing Nordmann, a triangular tree with rich green foliage and soft needles. This type is easier to grow and makes up three-quarters of all trees sold here.