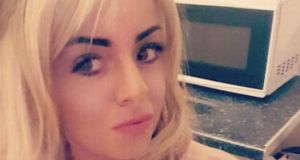 Mother of two Danielle Carroll, from Tallaght, Dublin, took her own life in a Kildare hotel earlier this week

For seven-year-old DJ, sitting holding the reins of his mother’s horse-drawn funeral carriage might leave him with a better boyhood memory than the awfulness of the occasion itself.

As his mother’s remains neared their final resting place inside Newlands Cross Cemetery in Ballymount, Co Dublin, the little boy sat up front, sandwiched between two adult funeral staff, and helped guide the carriage and its two jet black horses, both sporting tall white plumes, towards her grave.

Twenty-seven-year-old Danielle Carroll – “Danzer” to those who knew and loved her – faced more than her fair share of life’s troubles.

At her funeral on Monday, family members and close friends wore the yellow ribbon of suicide awareness, an acknowledgement of the circumstances of her sudden death.

Crêpe paper floral wreaths spelt in single words the huge role she had in the lives of others. Mam, said one, daughter another, sister and auntie said others still.

Danielle’s remains were encased in a brown and beige casket-style coffin carried inside the Victorian-style horse-drawn glass case funeral carriage.

As the coffin was removed and carried to its resting place, a man stepped forward and, with a handkerchief, polished the brass nameplate on its lid.

Her father Frank also went over to the coffin and, patting the lid as though it was a pillow, said: “I’m gonna miss you daughter.”

Earlier, at Danielle’s funeral Mass at the Church of the Incarnation in Fettercairn, he told mourners how he would miss her “lovely smile”.

“She is my daughter and will always be my daughter,” he said. “I’m going to miss her coming in with our lovely grandchildren, DJ and Carter, but we won’t miss them because we still have them.”

Symbols of Danielle’s short life were presented – among them a picture of her two boys, a CD of her favourite songs and a bottle of Budweiser beer.

“All of us are really stunned by the sudden death of Danielle and in the sadness expressed in the saying, ‘here today and gone tomorrow’,” said Fr Jimmy McPartland. “The biggest difficulty we have now is that we feel so powerless. Events moved in a swift and unforeseen way beyond our control. We have been left behind almost as feeble spectators.”

At Newlands Cross, the 100 or so mourners who brought Danielle there were spectators in the final act of the tragedy. As her casket was lowered down, they threw in flowers – red, white and yellow roses, and sunflowers.

A young man, thought to be Danielle’s partner, knelt and gathered the two boys to him, crying deeply and shaking his head in disbelief.

A young woman crouched by the open grave and wailed: “I just want her back.”

And they waited long after it was over, staring into the ground, hugging each other, DJ and his baby brother unaware of the enormity of the occasion but unlikely wholly to forget it either.

Danielle is survived by her sons and her father, by her mother, Margaret, and siblings Sandra, Pauline, Caroline, Franer, Paul and John.

*For support contact the Samaritans on freephone 116123, or email jo@samaritans.org