It’s official: summer 2017 was a washout across Ireland

It was wetter, cooler and duller than average nearly everywhere, according to Met Éireann 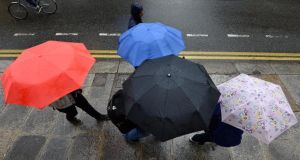 It will come as no surprise that the summer of 2017 was a washout across Ireland, according to Met Éireann.

It was wetter than normal everywhere, especially the western half of the country. Newport in Co Mayo had a particularly soggy time, with 65 days of rain. The weather station there recorded 471.5mm of rain over the summer, its wettest since 2009 and 146 per cent above the long-term average.

Temperatures were nothing special, either, with most parts of Ireland cooler than normal. Phoenix Park, in Dublin, was an exception. It recorded an average temperature 0.6 degrees above the long-term average.

The park also recorded the highest temperature of the year, at 28.6 degrees on June 21st. That was during an unexpected heatwave – officially defined as five consecutive days when the temperature is five degrees above normal. There were two short spells of particularly fine weather. High temperatures were recorded between June 18th and 21st and on July 17th and 18th. June was the only month when temperatures were above normal.

July’s “notably cool” weather was caused by a westerly airflow steering bands of rain across the country. The pattern was repeated in August, which is often a disappointing month meteorologically.

Malin Head recorded its wettest summer day since 1955 on August 22nd, when the remnants of Hurricane Gert dumped 77mm of rain on the Inishowen Peninsula, in Co Donegal, damaging homes and carrying away bridges.

The weather station at Malin Head recorded its wettest summer in 19 years mostly as a result of that deluge.

The highest temperature of the month was a less than impressive 23.2 degrees, recorded at Shannon Airport on August 21st.

It was particularly cold at the Athenry weather station, where the average for the month was just 13.8 degrees, 1.4 degrees below normal.