Ardently pro-European, the veteran Tory has watched in horror as the debacle unfolds 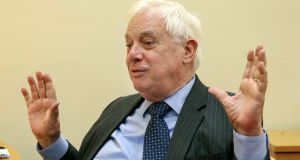 Standing under the tower clock in the chilly quadrangle of National University of Ireland, Galway, Chris Patten is being buffeted by two storms. The first is the beginnings of Storm Gareth blowing in from the Atlantic. The other is the ongoing tempest raging in Westminster, or to put it in his memorable phrase, “this crazed ideological jihad we are involved in”.

Lord Patten of Barnes, to give him his full title, was in Galway on Tuesday to deliver a speech in honour of the formidable Northern civil servant Maurice Hayes, who bequeathed his archive to NUIG and with whom Patten worked closely in Northern Ireland, first as a minister, then as chairman of the Patten Commission which transformed and depoliticised policing here.

Since his arrival in the west on Tuesday, he has been keeping a weather eye on the debate in Westminster and what he sees as inevitable defeat for prime minister Theresa May’s latest proposals.

Ardently pro-European and a moderate Tory, Patten has watched in horror from the House of Lords at the debacle that has unfolded.

“I can never remember politics being in such a mess. I am 74,” he says.

For him, May’s “red lines” of leaving the customs union, leaving the single market and not recognising the jurisdiction of the European Court of Justice have been major factors in compounding the crisis. There was no evidence, despite May’s assertions, that this was the people voted for, he says.

For him, a vote to delay the process is the only possible outcome that will emerge this week.

“The only way we can get through is if sensible people on both sides in the House of Commons – Hillary Benn, Nicholas Bowles, Yvette Cooper, Oliver Letwin – come together and try to ensure the delay is more than a few weeks.

“We should have a delay until the end of the year or early next year and go back to those awful bloody red lines, and you would try to go back and negotiate something like the Norway Agreement, which would not be as good as what we have now. They talk about Canada-plus-plus-plus.

“Nothing is as good as EU. We are going to be EU-minus, which is depressing.

“The only way out now is to hope that Mrs May doesn’t think being beaten by 80 or 100 votes is a signal that she is making progress and she can come back a third time and get it down a bit lower. It’s a wretched view of parliamentary democracy.

“I would hope that taking no deal off the table and voting for a proper delay and a serious attempt to construct a majority in favour of staying in the EU [is what happens].

“It’s partly because of demography. The majority are dying off. What we have got to find is a way where leaders will accept that when they talk about the majority, it may no longer exist.”

Lord Patten has a CV bedecked with achievement. A Catholic with Irish antecedents from the northwest of England, he won a scholarship to Oxford, became a Tory MP, then chairman of the party, and engineered John Major’s unlikely victory in 1992, in an election where he lost his own seat. He later became the last British governor of Hong Kong, an EU commissioner, and also chairman of the Patten Commission, which he says was probably the greatest success of his career.

From his eyrie of the House of Lords, he has witnessed with horror a reverse takeover of the Tories. He says the referendum was an inept effort by former party leader and prime minister David Cameron to “defang” the small group of right-wing nationalists in the Tory party, which backfired spectacularly. That, he said, was compounded by Mrs May’s identification of “red lines” which did not reflect the actual vote.

And so the referendum passed because of people in beleaguered parts of Britain voicing opposition to immigration and older richer people in the Tory Shires who had a “sepia view of Britain’s place in the world”.

He argues the red lines and what he says were the “hopeless” ministerial negotiators have come back with a poor deal after two-plus years, with many more years of despair to come.

“I am very gloomy about the impact it has had on British politics.

“I remain a moderate Tory until the crack of doom.

“What makes it worse is the Labour Party is in such a mess as well, with a leadership with a hopeless Chavez acolyte leading it and a group of people who are hardline Stalinist in their world view around him. Most of the Labour Party are not like that.”

Patten’s lifelong commitment to Europe follows a line that Britain never had it so good. “We went into the EEC to revive our economy and to compete with Germany and others. We did very well out of it. We got Europe a la carte. We were outside Schengen. We were outside the euro zone. We created pretty well the single market ourselves.

“We were very much in favour of opening up market and and international trade policy.

“We more than anything else had to drive the enlargement in central and eastern Europe. What is not to like?”

But what has emerged in his view is a reverse – a view of Britain alone in the world that “betrays the most small-minded nationalism imaginable”.

He is also scathing that May did a deal with the DUP, a party which he said would ultimately look after its own interests: “Arlene Foster the last day said that Brussels and Dublin were continuously intransigent. Political irony is clearly not dead,” he remarks.

The Tory eurosceptic European Research Group, he adds, is worse in its political effects than the socialist Labour movement, Momentum. He then asks and answers a question of his own.

“Why is the backstop necessary? Because of the bloody decision to get us out of the customs union… There is nowhere in the world where two territories with different customs arrangements don’t have a hard border. There is no technology, but the hunt for unicorns (goes on). If you are polite, you say self-delusional. If you are not so polite you say mendacity.”

And regarding the impact on the North, he prefaces his remarks by saying that despite the current stalemate, it is incomparable to the past.

“I dare say that in the 1980s and 1990s, if we had seen what was happening today, we would have bought it in a heartbeat: no violence; no shootings, no bombings, or putting drills into people’s knees.

“I think that it’s important that the UK, no matter what happens in Brexit, understands it has a huge responsibility in not returning Northern Ireland to bloodshed.”