‘The Choctaw family identified with the anguish, the spread of disease and starvation’ 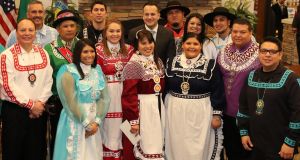 Taoiseach Leo Varadkar meets members of the Choctaw Nation in Oaklahoma on day two of his week-long visit to the US. Photograph: Niall Carson

More than 170 years after the Choctaw nation donated money to Ireland’s Famine victims, Taoiseach Leo Varadkar made the journey on Monday to rural Oklahoma to express gratitude for the gesture on behalf of the Irish people.

At a gathering in the community’s homeland of Durant, Mr Varadkar addressed the small community of civic leaders, tribal members and local politicians who had gathered to meet the visiting Irish Taoiseach.

The story of the Choctaw’s donation to Irish Famine victims is an extraordinary one. In 1847, the Choctaw community collected $170 to send to the Irish victims of the Famine – a sum equivalent to approximately €4,000 in today’s money. This was despite the Choctaws having undergone their own hardship 16 years earlier when they were forced to move west of the Mississippi by the government of Andrew Jackson in a journey that became known as the “Trail of Tears”.

After a private bilateral meeting with the tribe’s chief Gary Batton, the ceremony proper began with a prayer delivered by tribe member Lillie Roberts in the native Choctaw language

It is said the community heard about the Famine from an Irish man who was implementing the forced displacement west of the Mississippi – many Irish were involved in the project of mass displacement of the indigenous community that spanned decades, an example of how the Irish were not always the victims but sometimes the agents of colonisation.

After a contribution was collected, the money was sent to a philanthropist working with the New York Society, who forwarded the funds to the Society of Friends in Dublin, a Quaker organisation established a year later, after the crisis deepened. The money was then distributed to victims of the Famine where it was used for food, feed and blankets.

The visit was about celebrating an extraordinary act of generosity by one community to another more than 4,000 miles away.

After a private bilateral meeting with the tribe’s chief Gary Batton, the ceremony proper began with a prayer delivered by tribe member Lillie Roberts in the native Choctaw language.

Both leaders spoke briefly to the assembled guests, and musicians representing both indigenous communities shared their heritage.

The Taoiseach was treated to a display of native American music and dancing, complete with native Indian whoops and rhythms. Two Irish-American siblings Ireland and Declan Harber, delivered a haunting rendition of An Cailín Álainn, accompanied by a bodhrán .

The two leaders exchanged traditional gifts – a hurley was presented by the Taoiseach, while Chief Batton gave Mr Varadkar a Choctaw stickball.

In 2007, the Choctaws donated $8,000 to the Shell to Sea campaign in Mayo, with tribal representative Gary White Deer travelling to north Mayo to announce the donation

Ms Roberts informed the guests about the Irish Famine, and how it captured the hearts of the Choctaw tribe in the 1840s. “The Choctaw family identified with the anguish, the spread of disease and starvation,” she said, just a few years after their own experience of hardship. “It was an extremely familiar heartache.”

While the event marked the connections of the past, it was also about looking to the future. The Taoiseach announced details of a new scholarship specifically for third-level Choctaw students to study in Ireland. He also spoke at length about the imperative for the Irish and the Choctaw nations to help those currently in need throughout the world, “to look outward, to do what we can to combat hunger and poverty around the world”.

While the Taoiseach will be pleased with how the wise chief described him – “humble, very quiet but yet carries himself very well” – he will be equally chuffed to have handled the local stickball with skill, no mean feat for a taoiseach who has not exactly been comfortable with a hurley in the past.

Despite all the talk of the generous donation given in 1847, no mention was made of a more recent donation. In 2007, the Choctaws donated $8,000 to the Shell to Sea campaign in Mayo, with tribal representative Gary White Deer travelling to north Mayo to announce the donation.

Perhaps it was something the government wanted to forget. But on Monday, politics was put to the background as both communities celebrated a friendship that was forged between two very different worlds more than a half a century ago. In the words of Lillie Roberts, two nations managed to forge a bond that would “last for generations into perpetuity”.