Together for Yes will be a ‘broad-based civil society campaign’ 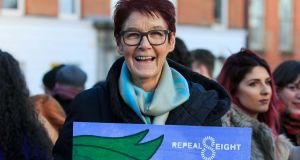 Ailbhe Smyth will co-chair the Together for Yes campaign. Photograph: Gareth Chaney Collins

Campaigners for the repeal of the Eighth Amendment plan to launch their nationwide umbrella campaign next week in Dublin under the banner “Together for Yes”.

The group will be a joint campaign led by the National Women’s Council, the Coalition to Repeal the Eighth Amendment and the Abortion Rights Campaign, and will be a “broad-based civil society campaign”, according to Orla O’Connor of the NWCI.

Amnesty International will also run its own campaign in support of the referendum, which though separate will co-ordinate closely with the Together for Yes.

Senior activists and campaign leaders met in Dublin last weekend to plan the campaign and finalise details for next week’s launch. The group has taken office space in the city and appointed a campaign director, Deirdre Duffy, and a director of communications, Amy Rose Harte.

The campaign will be co-chaired by Ms O’Connor, Grainne Griffin of the Abortion Rights Campaign and Ailbhe Smyth, a long-time pro-choice campaigner who was also prominent in the leadership of the successful same sex marriage campaign in 2015. Insiders say that the approach of the campaign will be modelled in many respects on the Yes Equality campaign of that year.

Sources in the campaign say they expect to liaise with political parties, though it is unclear if the two biggest parties will mount any campaigns around the country, though Ministers and the Taoiseach have committed to advocating for a change. Labour, Sinn Féin and the smaller parties are likely to mount their own campaigns.

With the referendum likely to be held on May 25th, there are now 11 weeks campaigning before polling day.

“The publication of the wording and the policy proposals clears the way for us to go on with our campaign,” said Ms O’Connor.

“We know that the majority of people want change. We have to make clear to people that if they want change, the Eighth has to come out of the constitution.”

She acknowledged that the Government’s proposal to introduce abortion on request up to 12 weeks “will be one of the battlegrounds”.

Ms O’Connor said that she and other NWCI staff working on the campaign would not be paid from the funding the State provides to the council, as the State is prohibited from funding one side in any referendum campaign due the McKenna judgment in the Supreme Court.

The NWCI has already written to the Department of Justice to inform them that the staff will be paid from a different, non-state funded account during the campaign.

Ms Smyth said that the campaign was building links with other organisations – such as trade unions and NGOs – to give the repeal campaign as broad a base as possible. She said the campaign would “understand how difficult the question is for many people”.

“We will respect the range of opinions that are out there. At the same time, we will say that women’s need for abortion care is a reality.”

Meanwhile, the former president Mary McAleese has said she was disappointed the Eighth Amendment did not do what it had been supposed to do but she declined to be drawn on how exactly she planned to vote.

Having listened to the evidence of obstetricians like Peter Boylan and Rhona Mahony, she said it was obvious that they felt they were hampered and that the law was “too tightly written”. The case of Savita Halappanavar had also caused her great concern, she said.

People were being offered two possible abortion models, she said, one for where the life of the mother was at risk and the other as a non-medical procedure. “That’s a jump that people will find it difficult to make,” she said.

However, she said she has no plans to take part in the campaign for repeal of the Eighth Amendment.