What is bacterial meningitis and what are the symptoms?

There are three subgroups of meningococci: A, B and C. Vaccines are available against B and C 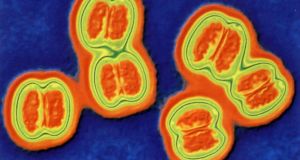 Meningitis bacteria: The classical rash of meningitis is actually caused by the infection spreading to the bloodstream.

Bacterial meningitis is caused by a number of organisms of which meningococcus is the most common. The meningococcus bug is also called Neisseria meningitidis.

About 10 per cent of the population carry the meningitis microbe in their noses without ever developing symptoms. Transmission occurs from person-to-person via respiratory secretions. A small minority of individuals who pick up N. meningitidis develop invasive infection after an incubation period which is typically one to 10 days, although this usually occurs in less than four days.

The meningococcus bug causes two distinct illnesses: meningitis and septicaemia. When it invades the lining of the brain and spinal cord, it causes meningitis. A widespread infection of the blood results in septicaemia. Both illnesses can occur together, causing symptoms such as headache, neck stiffness, drowsiness and a characteristic skin rash.

There are three subgroups of meningococci: Groups A, B and C. Vaccines are available against meningitis B and C.

Other causes of bacterial meningitis include invasive streptococcus pneumonia, haemophilus influenza, tuberculosis (TB) and listeria. Regardless of the particular type of bacteria causing the meningitis, the classical features of the disease include headache, neck stiffness, photophobia (aversion to light), vomiting and fever. Joint pain and drowsiness may also occur. However, in younger children, the signs may be far less specific and may include lethargy, irritability, and poor feeding.

The classical rash of meningitis is actually caused by the infection spreading to the bloodstream. This condition is called septicaemia and leads to the appearance of a purple pinprick rash on the skin. Untreated, this spreads rapidly to form more confluent areas of discolouration.

Treatment of bacterial meningitis is with intravenous antibiotics, given immediately on suspicion of meningitis and preferably before hospital admission. Close household and school contacts of the patient with proven meningococcal meningitis are given an oral dose of an antibiotic to protect them from the bug. Severely ill patients with meningitis require intensive care.

‘There were times I had to step outside to hide my tears, take deep breaths and then carry on’
7