Child dies after accident in Tipperary

Funeral of Jodie Lawlor Tyrrell (4) to take place on Wednesday 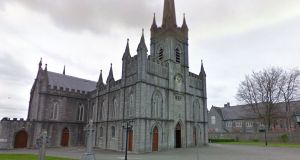 Jodie Lawlor Tyrrell will be buried on Wednesday after funeral Mass at St Brendan’s Church in Birr. Photograph: Google Maps

The funeral will take place on Wednesday of a four-year-old girl who died in an accident at a house that was being renovated in Tipperary.

Jodie Lawlor Tyrrell from Cloughjordan died on Saturday after the incident in Shinrone. Local media reported that the child had been visiting the house with her family.

Emergency services attended the scene and the girl was taken to University Hospital Limerick. Gardaí are treating the incident as a tragic accident.

A spokesman for the Health and Safety Authority said that while the incident was not reported to it when it occurred, it was aware of it and was following up with local gardaí to try to get more information.

The child will be buried on Wednesday after funeral Mass at St Brendan’s Church in Birr.

She is survived by her mother Jessica and brothers Jayden and Kai.