Video from Limerick City and County Council shows flooding in the Merchant's Quay area of the city due to Storm Brian. Video: twitter/@LimerickCouncil

The west of Ireland took a beating from Storm Brian overnight with Limerick and Galway cities both experiencing flooding. Video: Joe O'Shaughnessy 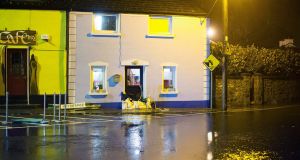 Sinead Murphy looks out of her house in Kinvara, Co Galway on Saturdat as Storm Brian hit Ireland. Photograph: PA 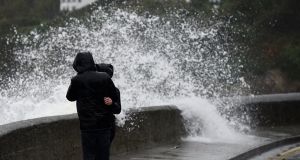 A wave breaks over a wall as bystanders look out across the Irish Sea during Storm Brian in Dublin, Ireland on Saturday. Photograph: Clodagh Kilcoyne/Reuters 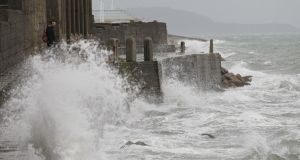 A clean-up operation is under way on Sunday after Storm Brian caused some flooding and travel disruption.

Less than a week after ex-hurricane Ophelia battered the country, resulting in three deaths, the latest storm brought high winds and large Atlantic waves through Friday night and into Saturday.

But while some ferries were cancelled and some local roads closed, damage was been limited, the head of the Republic’s emergency co-ordination group said.

Motorists are being advised to reduce speed especially on local roads and routes near the coast where there may be spot flooding.

Limerick city was one of the areas worst-hit as the River Shannon overflowed on Saturday morning flooding homes and businesses.

Merchants Quay, the location of the Limerick courts complex also flooded, as did the tax office building at Sarsfield House. Council emergency workers pumped out the flood waters from the worst hit areas.

The flooding in Limerick city later receded as water levels in the Shannon fell after the morning high tide.

Local resident Tom Bolger could only look on as the River Shannon swept into his home, at Mill Road, Corbally.

“We got three inches of water in right across the house. Unfortunately it was the tide and the wind together that did it,” Tom said.

Heavy floodwaters caused the River Blackwater to burst its banks in Mallow late on Saturday night and Cork County Council was forced to close the low-lying Park Road.

Cork County Council staff also erected flood barriers around the bridge as part of its flood protection scheme to successfully ensure that Bridge Street and the Spa area did not flood.

Spot flooding on the N11 as #StormBrian's eye approaches the East, drive to the conditions #BeSafe pic.twitter.com/gvoAFsZL4Z

Flood waters are starting to recede on the Park Road on Sunday morning after rain stopped overnight and it’s hoped that the road may re-open to traffic later today.

According to gardaí in Fermoy the town escaped serious flooding overnight even though water levels in the Blackwater rose significantly. Water levels are expected to recede on Sundaynow rain has stopped.

Meanwhile the Ladysbridge to Garryvoe road in east Cork has re-opened to traffic on Sunday after being closed on Friday night due to flooding but gardai have urged motorists to drive with caution in the area. The county was one of those worst affected by ex-hurricane Ophelia.

Sean Hogan, chair of the emergency group, said on Saturday: “The rainfall is not finished but the extent of damage, flooding and disruption has been limited and in line with expectations for this type of Atlantic storm.”

Many popular visitor locations, such as the Cliffs of Moher in Co Clare, were closed to the public on Saturday due to the weather warnings.

“Do not visit, it is unsafe and extremely dangerous,” said a warning on the venue’s website.

Racing at the Fairyhouse track in Co Meath was postponed.

The orange wind warning, the second highest, which was issued for southern and western coastal areas on Saturday has now expired and there are no weather warnings in place for Sunday.

Storm Brian was the result of a “weather bomb” of low pressure in the Atlantic Ocean.

It arrived in Ireland as the country is still picking up the pieces in the wake of Ophelia.

On Saturday Rail passengers faced disruption on Saturday due to trains being limited to 50km/h amid concerns over the powerful winds.

Iarnród Éireann has since announced speed restrictions have been lifted on all routes and services were now operating normally.

Dublin Airport said they were not expecting Storm Brian to have any significant impact on flight operations. However, passengers are advised to check with their airline for the latest information.

Bus Éireann announced a number of services were cancelled in the east of the country on Saturday, due to “operational issues”. Services on Sunday are operating to schedule.

Cork City Council has said people should travel with care because many trees and buildings remain damaged and unstable following ex-hurricane Ophelia.

The National Emergency Co-ordination Group warned Storm Brian is likely to impact on ESB work following Storm Ophelia and may increase the current number of customers without power.

Work continues to restore power to the remaining 10,000 customers. Any damage to the electricity network should be reported on 1850-372999.

Customers can check their estimated reconnection time regarding their individual situation using the PowerCheck app or by logging onto powercheck.ie.