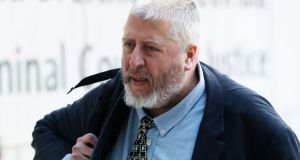 Former Irish Times sports journalist Tom Humphries has been jailed for two-and-a-half years for grooming a girl from when she was 14 years old before sexually abusing her.

Dublin Circuit Criminal Court previously heard Humphries exchanged at least 16,000 text messages with the girl during a three-month period leading up to March 2011 as part of the grooming process.

Humphries appeared in court on Tuesday afternoon for sentencing, having spent the last three weeks in custody in the Midlands Prison on his own request.

This afternoon he was taken to Mountjoy Prison. He is likely to be sent from there to Arbour Hill Prison which houses mainly sex offenders, to begin his sentence.

In her lengthy sentencing remarks, Judge Karen O’Connor said the offences deserved a “headline sentence” of four years in prison. However after taking into account mitigating factors including Humphries’s previous “high profile” and his fall from that position, she reduced this by 18 months.

“It would be difficult not to have sympathy for him. That’s not to excuse his behaviour,” Judge O’Connor said.

“It’s something of a truism to say the higher the profile and success of a member of society the greater the fall.”

She said the most important mitigating factor was Humphries’ guilty plea but noted that this came late in the day, meaning the case dragged out for years.

She also took into account character references from chief sports writer with the Sunday Times, David Walsh, and from Cork hurling star Donal Óg Cusack, as well as references from his family.

The judge said the aggravating factors included the disparity in age and “position” between Humphries and the girl as well as the fact that Humphries targeted a “vulnerable” victim.

She said the most relevant aggravating factor was the affect the offending had on the injured party. Judge O’Connor noted she suffered from feelings of guilt, shame and self hatred and that she lost her passion for GAA.

Judge O’Connor imposed a two-and-a half year term for the defilement and a two-year term for the grooming offences, both to run at the same time. She declined to impose a post-release supervision order.

She also backdated the sentence to when Humphries went into custody three weeks ago.

There was no apparent reaction from him as the sentence was read out.

The journalist, who has not written for The Irish Times since 2011 and was let go from the newspaper after pleading guilty to sexual offences charges last March, sexually abused the girl on five occasions after asking her to meet him.

Humphries (54), from Sutton, north Dublin, pleaded guilty to two counts of defilement of a child in Dublin between December 5th, 2010, and February 19th, 2011, and four counts of inviting a child to participate in a sexually explicit, obscene or indecent act between January 2010 and March 2011.

Prosecuting counsel Shane Costello SC told Judge O’Connor the offending first came to light in March 2011 when Humphries’ daughter was collecting old phones for charity. Her father donated his old phone and she turned it on to make sure it still worked.

On the phone she found a large amount of sexually explicit text messages Humphries had sent to someone stored in his phone under a false name.

She went to her mother with the messages and her mother contacted her brother, Humphries’s brother-in-law.

Humphries was estranged from his wife at the time and living separately from her.

The brother-in-law and daughter then confronted Humphries, who made a partial admission and said he was going to take his own life. At this stage, Humphries’ daughter checked another two of his old phones and found further messages.

Humphries was brought to hospital as a suicide risk while the Garda were alerted and given the three phones.

A large-scale investigation began involving the Garda Computer Crimes Unit. Gardaí discovered the recipient of the messages was a girl Humphries had started contacting in 2008.

The contact started after Humphries obtained the girl’s number from a third party and sent her an unsolicited text offering her encouragement on her camogie playing.

He also texted her about personal issues she was going through at the time and encouraged her to keep playing GAA with her local club.

After a while, the messages became sexually explicit.

Humphries twice sent the girl pictures of his genitals which caused her to get very upset. She asked him not to send such pictures again and he apologised.

After this, the messages became more innocent in nature before becoming sexual again over time.

Mr Costello read out some of the messages in court, describing them as “a snapshot of the types of texts exchanged between the accused and the complainant when she was 16.”

Humphries would ask her about her sex life and repeatedly referenced his own genitals and what acts he would like to perform on the girl.

He would exchange emojis and smiley faces with her. On one occasion, after she thanked him for buying her a burger, he replied with an explicit reference to his genitals.

As well as explicit messages he also sent other texts such ones wishing her a happy birthday.

On New Year’s Day 2010, he texted her “Happy New Year” to which she replied “Shall we make it one to remember?”

In the same conversation she told him “I love you” to which he replied “you too.”

The Computer Crimes Unit uncovered thousands of texts sent between Christmas 2008, when the girl was 14 years old and April 2011, when she was 17 years old.

In one three-month period in 2011, Humphries exchanged at least 16,000 messages with the girl. The texts eventually built up to him asking her to meet him in person. The girl thought he was joking at first but then realised he was serious.

On the first occasion they met, he picked her up from her school at 10am and brought her to an apartment where counsel said “oral sex” occurred.

In April 2011, gardaí interviewed the girl, who was 17 at the time. She told them she had met Humphries on five occasions during which sexual acts took place, including oral sex but not full intercourse.

After the text messages were found, Humphries spent about a year in a psychiatric facility. He was arrested by appointment in September 2012 but declined to say anything in interview.

The victim, who is now in her 20s, was in court for the hearing on Tuesday during which she declined to accept a letter of apology from Humphries.

In her victim impact report, which was read by counsel, the woman said that “dealing with sexual encounters with a man three times my age made me physically, mentally and emotionally ill”.

She said she has been suicidal and has lost her childhood and her trust in men because of Humphries.

She now has “permanent flashbacks and severe panic attacks” as well as depression which has caused her to lose friends. She also missed school and exams because of the “dragging out” of the case.

“I never felt as low and as small about myself when this happened to me,” she wrote.

In a passage which Mr Costello called “remarkable”, the woman thanked Humphries’ family for bringing the abuse to the attention of gardaí.

“Without them reporting this I do not know where I would be today. I hope you can all get past this and go on to live a normal and healthy life,” she wrote.

During the earlier sentencing hearing Humphries’ defence counsel Hugh Hartnett SC said his client is suicidal and suffers from complex medical and psychiatric problems. He said Humphries does not want treatment because he believes “he deserves to suffer.”

Mr Hartnett handed in a 50-page bundle of psychiatric reports on his client. The reports suggested Humphries may suffer from a “neuro-cognitive disorder” which could have led to “an impairment of judgement” at the time of the offending but not to the extent where an insanity defence could be used, counsel said.

The barrister also submitted that Humphries suffers from severe cardiac problems and as well as serious obesity.

Mr Hartnett also handed in two testimonials about Humphries’ journalism career and his involvement in the GAA. One was from the “chief sports writer of the Sunday Times” who called Humphries a “hugely regarded, hugely respected national figure”.

The other was from a “well-known sportsman” in the GAA who detailed Humphries’ volunteer work in the GAA and expressed “shock and disappointment” at his offending.

Mr Hartnett said Humphries has “suffered hugely” as a result of his arrest, particularly due to media reports which “pilloried” him.

He said his “brilliant career is at an end” and he will “never work again as a sports journalist”.

Humphries started work a journalist with The Irish Times in 1992. Over the years he became one of the country’s best known sports writers and covered many high profile events such as Olympics and World Cups. He is also the author of several books including a biography of Irish footballer Niall Quinn.

In a statement The Irish Times said it was advised of allegations against Humphries in March 2011.

Humphries has not written for the newspaper since then and was suspended in March 2014 when he was formally charged with the offences.

His employment was terminated “with immediate effect” in March of this year when he pleaded guilty.

“The disclosure that Mr Humphries was the subject of serious allegations and of a criminal investigation was a source of shock and distress to his colleagues,” the statement said.

“This matter has been treated with the utmost seriousness throughout. The Irish Times, in its response, has been guided by the provisions of employment legislation and the requirement to allow the criminal justice system to proceed without interference.

“The Irish Times fully co-operated with the Gardaí at all times during their investigation.”

Irish youth to lead global study into impact of Covid-19 on young people 00:00
‘If you apply for a driving test now, you might get one by June’ 23:57
UK government to announce decision on Finucane murder inquiry 21:05
Sinn Féin TD Brian Stanley apologises for ‘inappropriate’ tweet 20:38
Gardaí predict increased number of shebeens over Christmas 19:34