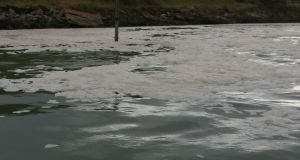 Storm water overflows were released untreated into Dublin Bay last weekend due to adverse weather conditions as a result of Storm Brian.

The releases were at the Ailesbury Pumping Station into Sandymount Strand and at the Long Sea Outfall at the West Pier in Dún Laoghaire, Irish Water has confirmed.

“This occurred as flows exceeded the available storage capacity in the [waste water] network,” an Irish Water spokeswoman added. “Both overflows are connected to warning signs on the beaches to alert water users that the overflows are in operation.

“The infrequent operation and dilute nature of the overflow does not impact on the water quality as the Irish Sea has adequate dilution given the volume of water.”

Members of the public also reported discharges into the Liffey from the nearby Poolbeg waste water treatment plant.

Local senator Kevin Humphreys of Labour said such incidents were not infrequent after periods of heavy rainfall, and over the summer required “No swimming” notices at nearby Merrion Strand.

The incidents were arising because the waste water treatment plant had reached its capacity limit, he said, and needed to be expanded.

The problem was compounded by the Pembroke combined sewer, which extends from Rathmines and Ranelagh and discharges into the Swan River. This needed to be upgraded 20 years ago, he added, and was the cause of flooding during periods of high rainfall.

Treatment of waste water at the Poolbeg facility was found to be deficient by the Environmental Protection Agency in its latest report on sewage processing facilities.