‘It still feels like a dream’: Ibrahim Halawa arrives home after four years

‘This is the moment I’ve waited for for four years. It’s impossible that I’m really here’ 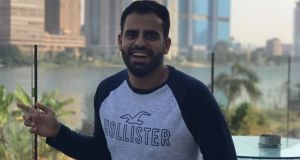 Ibrahim Halawa returned to Ireland on Tuesday after four years in prison in Egypt. 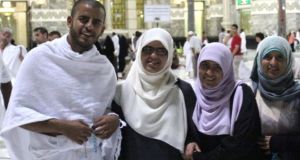 A file picture of Ibrahim Halawa with three of his sisters before his arrest four years ago. His family said they could finally sleep peacefully now that he had been released. 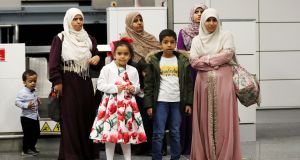 Family of Irishman Ibrahim Halawa wait for him to arrive back at Dublin Airport after being released from an Egyptian jail following four years behind bars. Photograph: Brian Lawless/PA Wire 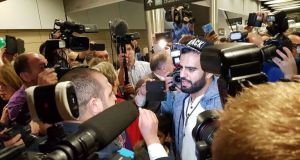 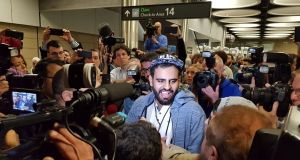 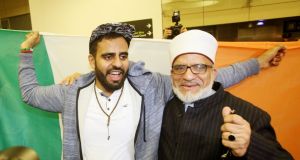 Sheikh Hussein Halawa with his son Irishman Ibrahim Halawa as he arrived back at Dublin Airport after being released from an Egyptian jail following four years behind bars. Photograph: Brian Lawless/PA Wire 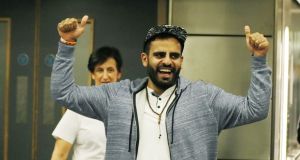 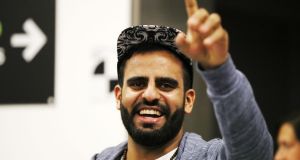 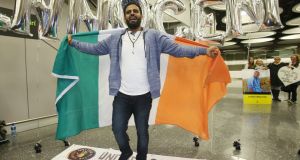 Ibrahim Halawa arrived back in Dublin shortly after 11am on Tuesday, after spending more than four years in an Egyptian prison.

Mr Halawa, from Firhouse, Tallaght, in south Co Dublin, was arrested in Cairo in August 2013 with three of his sisters, Omaima, Somaia and Fatima, following protests that broke out against the military coup that took place on July 3rd of that year.

His three sisters were released on bail and returned to Ireland three months later, but he remained, and it wasn’t until four years later that he was acquitted of all charges.

Mr Halawa was released on Thursday night, one month after his acquittal. His sisters, who were tried in absentia, were also acquitted.

Mr Halawa, whose trial was postponed 28 times in four years, was 17 at the time of his arrest. Now 21, he was reunited with his family on Tuesday for the first time in four years.

Speaking to reporters shortly after his arrival in Dublin Airport, he said: “It still feels like a dream. This is the moment I’ve waited for [for] four years . . . It’s a dream come true. It’s impossible that I’m really here. I didn’t think it would come through any time soon.”

He thanked Taoiseach Leo Varadkar, Minister for Foreign Affairs Simon Coveney, Sinn Féin MEP Lynn Boylan and others for assisting in his release, and said he wanted to spend time with his family.

Mr Halawa was accompanied by his father Sheikh Hussein Halawa, Ambassador Seán O’Regan and Minister for Children Katherine Zappone when he came down through the elevator to meet the crowd at the airport.

Mr Halawa said he will be speaking about the past four years in the near future. “Of course prison conditions are very hard in Egypt. They’re not easy, I need time to recover from that . . . It still feels like a dream.”

He said he has plans to help homeless people and Irish people who have been wrongly convicted in prisons abroad.

“And I need to get my life straight and go back to college,” he added.

Nosayba Halawa, one of Ibrahim’s five sisters, was in Egypt for the past month awaiting his release. She said she was concerned the delay by the Egyptian prison authorities in releasing him meant that Ibrahim would not be released.

She had been standing in front of the police station all day on Thursday, and said that when she heard of Ibrahim’s release, she ran through the streets.

“I’ve never ran like that in my life. He was going to the car of the [Irish] Embassy and I hugged him and was crying, and then I fainted,” she said.

She said his release had not yet sunk in during the journey to Ireland.

“I kept asking him, ‘Ibrahim do you believe you’re free?’ He said: ‘I dreamt of this day, but I never thought it was going to come.’ The moment we felt he was really free was when the plane flew over Ireland. We felt that we can finally rest now,” she said.

Dawn. A new day. A new beginning. It was a pleasure to see you home safely Ibrahim. All very best for the future. #Halawa #IbrahimHalawa pic.twitter.com/NsR1VoI4wr

“We were constantly worried that any delays might happen, up until we were actually in the air. Ibrahim said he was feeling they might tell the pilot to make a U-turn and go back to Egypt. But when it was in air we were really relieved and were taking photos and selfies. The day he left Egypt is the day we truly felt he was acquitted,” she said.

“The other day I was speaking to Ibrahim . . . and he said: ‘I was truly scared that something would happen to my mother or father before I got to see them.’ So seeing him hug my father after four years . . . He hasn’t seen him in those four years. It was a very emotional time,” she told The Irish Times.

Speaking to The Irish Times, Mr Halawa’s father, Sheikh Hussein Halawa, said he could not hold back his tears when he saw his son for the first time in four years.

Mr Halawa’s father said he is concerned for his son’s health. “He will need some time to recover, physically and emotionally,” he said.

Nosayba said the paperwork that allowed Mr Halawa to travel was completed on Sunday, meaning they were prepared to leave at any time, but they didn’t know the time of the flight until they were halfway to the airport on Monday night.

The next day, Mr Halawa’s family arrived to Dublin Airport before 11am and were taken to a separate room to meet him before he came down to the crowd.

“We thought maybe that when we saw him we were going to talk, but it was very emotional. Not many words were said. It was just tears. Just . . . you want to pinch him and see if he’s really here or not. My mom couldn’t move and my dad couldn’t stop crying. It was a very hard moment,” said Omaima Halawa.

Somaia Halawa said they were all standing in a circle taking photos before Ibrahim entered the room. “Then all of a sudden he came in. We all couldn’t stop crying. The kids were running around. He picked us up and we were in tears,” she said.

The family said they will be spending a few days together outside of Dublin to reconnect and to give Ibrahim time to recover.

“It’s the first time in four years to actually be gathered altogether. We’re trying to reconnect and make up for lost time, even though you can’t make up for four years,” said Fatima Halawa.

“The main thing is to allow Ibrahim to recover and feel like a free man. Everything is a new beginning for him. He’s suffered a lot and there’s a path that he has to take to recover and that’s really important.”

Mr Halawa’s family reiterated their gratitude for the current Irish Government, the Irish Embassy in Egypt, and everyone else who helped in his release.

“I also have to mention – the current Embassy team is a really amazing team. They did a lot of work and we truly felt that they were part of our family in Egypt. They were all working very hard to make sure that Ibrahim would get home safe. So I have to thank them and the office here in Dublin and the Taoiseach,” said Nosayba Halawa.

Minister for Foreign Affairs and Trade Simon Coveney confirmed on Tuesday that Ibrahim Halawa had returned to Ireland and been reunited with his family.

“I am delighted to confirm that Ibrahim Halawa has now arrived back in Ireland and been reunited with his family. This is a very happy day for Ibrahim and his family, and a day of great joy also for all of his friends and supporters.

“I and all of my colleagues in Government are very pleased that Ibrahim’s ordeal is now at an end, and that he is back home with his family.

“There will be many challenges for Ibrahim as he comes to terms with all that he has been through, and all the changes that have taken place while he has been detained in Egypt.

“He will need time and space in the period ahead and I hope that his privacy and that of his family will be respected.

“This case has been one of the most complex, sensitive and difficult consular cases to which the Irish Government has ever responded.

“There were some difficult and dark times, but sight was never lost of our two key objectives – to get Ibrahim home, and to do everything possible to safeguard his rights and welfare for as long as he remained in the custody.

“I want to express on behalf of the Government very sincere thanks to everyone who has been part of the effort to ensure that we would reach this happy day, when Ibrahim is finally and safely back home.

“My thoughts today are with Ibrahim and his parents, siblings and extended family. They have waited a long time for this day; they deserve to savour and enjoy it.”

Speaking in the Dáil on Tuesday, Mr Coveney said the Department of Foreign Affairs had spent more time on Ibrahim Halawa’s case than on any other in consular history.

The Minister said he hoped to meet Mr Halawa later on Tuesday.

Mr Coveney had previously said 20,000 hours had been spent on the case by his department and diplomatic staff at the Irish Embassy in Cairo.

She said everyone offered him “our best wishes” as he adjusted to being home.

Over the weekend, Somaia Halawa said her brother had been busy saying his goodbyes to family and friends in Egypt, as he feels he won’t be returning to Egypt any time soon.“He feels like it’s going to be the final goodbye,” she said.

Omaima Halawa added that her brother will return to new nieces and nephews who he has not seen before. “He is going to come and see his family has changed. His sisters are now married with more children. The babies he left are no longer babies.

“All these questions that you used to know about your brother, you’re going to be learning them again. Because things have changed dramatically in the last four years.”