Chester Beatty honoured 50 years after his death with new stamps 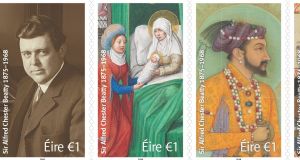 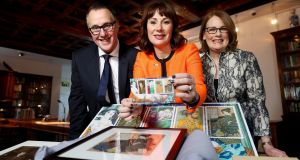 Pictured with the commemorative stamps are (left to right) David McRedmond, group CEO of An Post; Minister for Arts Josepha Madigan; and Fionnuala Croke, director of the Chester Beatty Library. Photograph: Maxwell

On January 19th, 1968 Sir Alfred Chester Beatty died at the age of 92 in Monaco. This American-born, British knight of the realm became the first private citizen in Ireland to be given a state funeral.

The honour was bestowed on Beatty as a result of the collection he bequeathed to the nation.

It includes the first surviving copies of all four Gospels and the earliest Koran by one of Islam’s greatest calligraphers. It is among the most significant collections of its kind in the world.

His collections of early papyrus for the bibles has been invaluable in determining how the New Testament, as we understand today, came together.

On the 50th anniversary of his death, library chair Catherine Day, the former secretary-general of the European Commission, praised the foresight of Irish politicians and diplomats who cultivated Chester Beatty after the former mining magnate got tired of post-war Britain.

“This was quite remarkable for the Ireland of the 1950s because it is not known as our most outward facing period,” she said.

“They had the foresight to see the cultural significance of the collection and help him to make his decision to come here.”

It is according to Fionnuala Croke, the director of the library, the “greatest gift by any individual to this country”.

As a result, Chester Beatty set up his library initially in Shrewsbury Road before it was relocated to the grounds of Dublin Castle in 2000.

The occasion of the 50th anniversary of Beatty’s death was marked with the unveiling of four new stamps featuring highlights from different aspects of the collection.

The first representing the East Asian collection was a privately commissioned Japanese woodblock print from the 19th century. The second was a portrait of Shah Jahan, ruler of India from 1627 to 1658, who is best known for having built the Taj Mahal. It is heading to the Getty Museum in New York on loan.

The third from their Western collection was a masterpiece of miniaturization. Simon Bening’s The Birth of the Virgin from 1530 was inserted into a prayer book commissioned by the Holy Roman Emperor Charles V. The fourth stamp is a picture of Chester Beatty aged in his mid-thirties taken in 1911.

The collection of stamps was launched by Minister for Arts, Heritage and the Gaeltacht Josepha Madigan.

The minister said the “beautifully designed” commemorative stamps were a fitting tribute to Chester Beatty and also to the fact that his passion for collecting began when he started collecting stamps as a child.