With John Delaney and Kevin Kilty leaving, the time is right to reform Olympics body 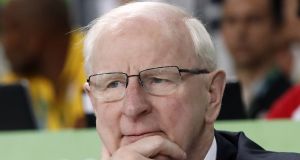 Pat Hickey at the Rio Games. The Deloitte report on the Olympic Council of Ireland is due to be presented to the council’s emergency general meeting on Thursday night. Photograph: Jack Guez/AFP/Getty Images

It seems like impeccable timing that two Olympic Council of Ireland (OCI) executives, John Delaney and Kevin Kilty, have left just as the Deloitte report on the OCI is complete.

It is expected that the report will be presented to the OCI emergency general meeting tonight.

In an increasingly fractured OCI executive, Pat Hickey is seeing the power base that he steadfastly built over the past 27 years begin to erode.

Delaney and Kilty were two of Hickey’s loyalists until recent events in Rio, and as part of the OCI top table they also represented votes. And votes were always the currency of Hickey since he became president in 1989.

A caveat to that is that although Delaney had been joined at the hip to Hickey, since the Rio ticketing debacle he had changed his view. He was, according to an executive member, “bulling” over what happened in Brazil.

Delaney, lest we forget, was asked to hand in his passport to Rio police authorities. As he wasn’t in the country at the time that did not happen and he has subsequently said that the judge rescinded the order.

But in the football boardrooms Delaney inhabits, a passport seizure during the Olympics, given Fifa’s recent problems with US law enforcement, would not have been welcomed.

Since the events in Rio, Delaney was seen to be one of the executives that might have voted for change until he stepped down this week. C’est la vie.

That some members, including Delaney, left the room when they learned the phone call was from a president who was forced to step aside, shows that the landscape has changed. But more importantly, most of the OCI top brass remained in the room.

The reality is that Hickey loyalists still outnumber the renaissance set within the upper echelons of the OCI, although as they depart there are fewer of them. The numbers are now very slender.

What it means in practical terms is that there are still enough status quo members on the OCI Executive Board to block recommendations using a tried and trusted method.

For example, they could form a working group to consider the Deloitte report and ask it to report back within six months. Delay everything and wait until the public attention abates.

With the Grant Thornton report into the tickets arrangements of the OCI, word coming back is that costs are spiralling and federations are concerned as everyone is “lawyering up”.

There are people on the OCI executive committee who many would see as traditional Hickey loyalists.

Acting president Willie O’Brien from archery, Dermot Henihan from rowing, cycling’s Billy Kennedy, Tommy Murphy from boxing and fencing’s Tom Rafter would be seen to be in that camp.

The more recent arrivals such as Darren O’Neill and Sonia O’Sullivan, along with Ciarán Ó Catháin and Sarah Keane, are perceived to be more open to change, and if the independently compiled Deloitte Report suggests that, they would give it their support.

With the fresh faces of O’Sullivan and O’Neill there might be five or six who could or would vote for the Deloitte report when it is presented and possibly five or six that may vote against it or just kick it to touch with a working group approach.

There are many issues about the OCI governance that are hard on the eye of the modernists. Voting is one such area that has been a traditional theatre of internecine fighting.

In 1989 the OCI constitution was changed at a meeting in the Shelbourne Hotel. Overseen by the then vice-president and chairman of the OCI sub-committee on the constitution Pat Hickey, the voting strength was changed by unanimous decision of the federations.

When it came to article 8 of the OCI constitution concerning the voting membership, the words “members of executive committee” were inserted.

The inclusion of those words gave voting rights to the OCI’s executive committee for the first time in the history of the organisation.

According to a delegate who attended that meeting the delegates had little idea of the implications, although they should have had.

“People present had no realisation of the implications of the change and that the OCI vote jumped from six to 11,” he said.

That was still the case up to the beginning of this week before the resignations, when the OCI confirmed that 36 federations are currently affiliated.

They also confirmed there are five OCI officers, seven in the executive committee, an International Olympic Committee member and an Athlete’s Commission representative, adding up to 14 votes.

The total electorate was therefore 50 (14+36) with the Federation’s 36 votes representing 72 per cent and the OCI’s 14 votes coming to 28 per cent, not enough for 75 per cent or change if the top table held.

With the two resignations that landscape has changed. Hickey won’t be in the room today, although assuming his innocence and return he will always be in the OCI as it is enshrined in the International Olympic Charter that their representative in every country is a voting member of the National Olympic Committee.

Neither now will Delaney or Kilty be in the room. If the OCI really want to change this is the time to do it. But as the past has shown, the federations and their representatives in the OCI have never really, never truly felt that need.