Labour leader says hollowing out of tax base in past left State unable to pay nurses, gardaí 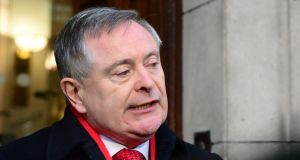 Labour leader Brendan Howlin has warned of the potential negative impact of tax cuts being speculated about ahead of the budget. Photograph: Cyril Byrne/The Irish Times.

The Government runs a very real risk of repeating the mistakes that led to the economic crash if mounting speculation about taxes being cuts in the forthcoming budget is correct, the Dáil has heard.

Labour leader Brendan Howlin said the tax base needed to be strengthened to provide sustainable public services and not “hollowed out” through tax breaks and tax cuts as the Fianna Fáil-led governments of the Celtic Tiger era had done to buy elections more than a decade ago .

Mr Howlin said that before the 2008 economic crash the government ran the economy on unreliable taxes and levies on the building industry, which disappeared swiftly when the recession hit. The tax take fell by 30 per cent in a year and there were insufficient funds to pay teachers, nurses and gardaí, he said.

The Wexford TD noted mounting speculation ahead of the October 9th budget about property taxes potentially not being linked to property values, which he said went against best international practice.

He warned that the top 20 per cent of earners in the State were likely to benefit from the income tax cuts being discussed.

“There is a very real risk of repeating the mistakes of the past,” he said.

Taoiseach Leo Varadkar acknowledged that the State had relied very heavily on tax receipts from the property sector a decade ago and was very conscious of the risks.

However, he said the tax base had been broadened to including property, sugar and carbon taxes. He said the “area of vulnerability” was around corporation tax and that “we have to make sure we don’t make long term spending commitments based on that”.

Mr Varadkar said the Government’s plan was to raise more from income tax next year by increasing employment rates and incomes but not taxes.

“The average person in Ireland working full-time, excluding students, earns about €44,000 a year and that person does pay some of their income at the highest rate,” he said.

He said that was an anomaly, unfair and “something we want to change”, but this would not be done in a single budget.