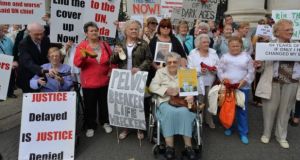 ‘The women have a right to reparations, which must be proportionate to the violence done to them.’ Members and supporters of Survivors of Symphysiotomy protesting outside Government Buildings in September. Photograph: Alan Betson/The Irish Times

A former senior civil servant in the Taoiseach’s office has called for a review of Ireland’s current two-year membership of the UN Human Rights Council, given the Government’s approach to victims of human rights violations such as symphysiotomy.

Mr Wally Kirwan, who served as assistant-secretary general in the Taoiseach’s department with responsibility for the Northern Ireland division, said that the Government was showing a “blatant disregard for and defiance towards conclusions reached by UN human rights monitoring bodies”.

Addressing a group of human rights lawyers at NUI Galway on November 28th, he was particularly critical of the tight application deadline of December 5th for the redress scheme given to women who had undergone symphysiotomy procedures which involved cutting the pelvic bone before childbirth.

Mr Kirwan, who was attending the symposium in tribute to the late human rights lawyer Prof Kevin Boyle, explained he was closely involved as a volunteer advisor to the Survivors of Symphysiotomy campaign.

He retired in 2004 following a career which included co-ordinator of the secretariat of the New Ireland Forum and secretary-general of the Forum for Peace and Reconciliation. In both roles he commissioned human rights studies from Prof Boyle and his colleagues in the North, which were heavily reflected in the Belfast Agreement and laid the basis for the human rights commissions on both sides of the border.

Mr Kirwan said that in this context it was “deeply disappointing” that the Government was now “utterly disregarding the conclusions of the UN Human Rights Committee and of the UN Committee Against Torture”.

The question arose as to whether Ireland’s membership of the UN Human Rights Council “should be suspended”, he said.

Ireland’s temporary membership of the UN Human Rights Council extends until December 2015, at a time when various non-governmental organisations (NGOs) have criticised the Government for ignoring recommendations of several UN human rights bodies and special rapporteurs on issues including abortion provision; the practice of symphysiotomy; policing of the Corrib gas dispute; and the rights of Travellers and asylum seekers.

The UN Human Rights Committee called for a “prompt, independent and thorough” investigation into symphysiotomy, including punishment of perpetrators of the procedure, in July.

It was conducted on an estimated 1,500 women between the 1920s and the mid 1980s, leaving them with permanent injuries and chronic pain. It is believed some 350 women who endured the procedure are still alive.

The Government’s scheme for symphysiotomy survivors announced last month offers between €50,000 and €150,000 to affected women, but payments are ex gratia and non-adversarial, as in there will be no admission of wrongdoing.

“You would be better telling them to vacate it than to disgrace you on the world stage of human rights,”she said, referring to Ireland’s UN human rights council membership.