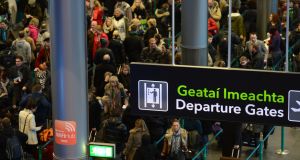 A report on the future of the State’s airports was brought to Cabinet on Tuesday by Minister for Transport Shane Ross.

The study examines the requirements of the airports up to 2050. A third terminal at Dublin airport was among the options discussed.

Mr Ross says an anticipated explosion in passenger numbers at Dublin airport will require long-term planning - which was why he commissioned a study on the airport’s future requirements.

The report before Cabinet was noted with great interest and will be published with enthusiasm, the Minister said.

The study concludes an independently run third terminal at Dublin airport would be feasible.

More than 50 million passengers a year will be passing through Dublin airport annually, according to the analysis. The report looked in detail at what will be needed to cater for these increased passenger numbers.

Mr Ross told RTÉ’s News at One that the reason the plans were not included in Project 2040 was because it is looking forward to 2050. “Planning for airports is very long term.”

The report by Oxford Economics, an organisation that specialises in global forecasting and analysis, will now go to public consultation, said the Minister. Responses are anticipated from the DAA and Fingal County Council.

Speaking on RTÉ’s Today with Sean O’Rourke show, Mr McEvaddy said he has been “planning for this” for over two decades.

“It’s going to happen. Space at the airport now is too congested; there is a need to expand westwards.”

Mr McEvaddy said a third terminal to the west side was required to double capacity. He said this should be completed before 2031.

The businessman said the cost of the third terminal would be €1.5 billion with zero funding required from State. The project would be funded through private investment, he said.

They have been attempting for the past 20 years to develop a third independent terminal on 130 acres of land adjacent to the airport.

Mr Ross said all the possibilities will be examined - to the northeast, northwest and north of the airport, as well as the possibility of a satellite terminal.

“It is never premature to make long term plans for airports,” the Minister said.

The DAA has said it has not yet seen the new report.

“The DAA’s consistent position over the past two years has been that Dublin Airport does not need a new terminal at the moment,” a spokesman said.

“This new report seems to fly in the face of the State’s National Aviation Policy, which was only adopted three years ago, as it made no reference to a possible independent terminal at Dublin Airport in the medium term.”

He said a third terminal will be needed at Dublin Airport further into the future, but they needed to build “the new infrastructure that is required now, and that isn’t a new terminal”.

He said the airport does require a new runway, aircraft parking stands, boarding gates and other facilities. And it “urgently needs new legislation in relation to the management of aircraft-related noise” to help address the “restrictive planning conditions that are attached to the North Runway development via a new independent regulator”.

He said DAA would shortly award the main construction contract for North Runway and is about to start formal consultation on a €900 million investment plan to include new boarding gate piers, new aircraft parking stands and other improvements.

“This investment will allow Dublin Airport to cost effectively and efficiently expand its operations to handle more than 40 million passengers per year,” the spokesman said.