Bus Éireann to suspend Dublin to Belfast service in November 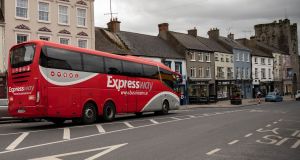 Bus Éireann has said that its Expressway service from Dublin to Belfast will be suspended indefinitely from November.

The route was among a number which the State-owned transport company said earlier this week it would cease to operate due to the financial impact of the Covid-19 pandemic.

Minister for Transport Eamon Ryan said on Tuesday the decision to stop operating the routes was appropriate for the company to make in an effort to manage its resources.

Mr Ryan said that “no town will be left behind” and that if any gaps were identified following the decision by Bus Éireann to shut down several of its 18 routes then the National Transport Authority will make sure such gaps were closed.

On Monday, the company decided to cease operating its Expressway services between Dublin and Cork (route X8), Galway (routes 20 and X20) and Limerick (route X12), and to suspend indefinitely the Dublin-Belfast (route X1) service. It also decided not to resume the X51 express service between Galway and Limerick which ceased operating in May.

The company is to boost its city services in Cork, Limerick and Galway as well as some of its commuter routes.

It has said no jobs will be lost as a result of the closure of some of its inter-city services.

“This is clearly unsustainable for a commercial operation. Today’s decision will safeguard Expressway’s remaining 14 national routes.”

The company said it was “working through the detail of when the routes will cease operating”.

“Plans are in place to indefinitely suspend the X1 Dublin-Belfast service in November and dialogue will commence immediately with staff representatives.”

The other services are expected to be closed next year.

The trade union Siptu, meanwhile, strongly criticised the decision by Bus Éireann to discontinue the Expressway routes as “short sighted, flawed and a kick in the teeth for workers and passengers”.

Siptu sector organiser John Murphy said: “Our members are calling for an immediate intervention by the Minister for Transport, Tourism and Sport, Eamon Ryan, to reverse this decision. Siptu representatives will lobby extensively on this matter and will seek the support of those dependent on these services and the public representatives within the regions and areas affected.”

Boy not screened for hip problem at birth settles action for €120,000 16:21
Second-level teachers vote for industrial action over school safety and pay 16:10
Mother and two children found dead at south Dublin house 15:55
Mother of two sentenced to life in jail for murder of former husband 15:52
Slight increase in number of Covid-19 patients in intensive care units 15:32