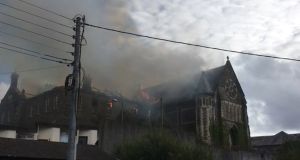 The blaze broke out at the former Sisters of Mercy convent on Cork Road in Skibbereen around 4pm and units of Cork County Fire Service from Skibbereen, Schull and Bantry were sent to tackle the blaze. Photograph: Barry Roche

Firefighters in Co Cork were on Tuesday battling a blaze at a former convent in Skibbereen.

The homes of a number of pensioners in a sheltered housing development nearby were evacuated as a safety precaution after the fire broke out at the former Sisters of Mercy convent on Cork Road at around 4pm.

Units of Cork County Fire Service from Skibbereen, Schull and Bantry were sent to the scene with large plumes of smoke visible over the town as a result of the fire.

It is understood that the convent, which is more than 140-years-old, has been derelict for around 16 years and the property, which had been in Nama, was bought by local developer Bernard Hennessy for around €500,000 in 2014.

Mr Hennessy told The Southern Star in 2018 that he had experienced difficulties in extending planning permission at the site and that was the primary reason why it has not been developed.

He was responding after local engineer Kevin Barry wrote to the newspaper expressing his sadness that the convent chapel, which he said was once a valued institution in the town, was being vandalised and in a state of decay.

More recently, The Business Post reported that Mr Hennessy had agreed to sell the former convent to Paul Collins, who developed the Skellig Star Hotel in Cahersiveen, Co Kerry. He said he had no plans to open a direct provision centre at the Skibbereen site.